The dark and wet last days of November offer a great possibility of creating art with your children. This morning, I made this Christmas craft with a group of persons with disabilities. It would also be a lot of fun for the whole family. You do not need a lot of materials. Plus, you recycle old magazines, flyers, calendars and papers at the same time.
Here is the material list:


I hope you have fun with this project. I would love to see images of your work. Have a great week! I will be back with the next blog on Friday, December 4, 2020.

Posted by Kerstin Peters at 02:30 No comments:

2004 was the year of the move to our dream house, requiring a lot of decluttering, packing and cleaning of the old house to get it ready for selling. Cleaning out and painting a house with two active kids and a dog was a challenge in itself.

Even though the actual start of construction was the beginning of April, we had a lot of running around to decide on materials. We had meetings with the architects, the contractors, and the bank.

Despite all the chaos around me, I still kept the promise to myself to deliver one painting to every bi-monthly Arteast library exhibition. I had started the acrylic painting “At the Market” (see above) for the show with the theme shopping. I finally managed to finish the painting around midnight the day before the hanging. It was still a close call.

At the end of March, I started the painting for the May exhibition with the theme of metal. I decided to paint a construction site - very fitting. This painting found its forever home in my parents’ house. As my father is an architect, he fell in love with the image right away.

We had decided to sell the house without an agent. Once the house was on the market in early April, the stress was immense. Keeping the house tidy and clean was impossible. I had a big job of cleaning the house before each showing, including washing the windows which always had marks of sticky fingers. At the end of May, we had refused one purchase offer because we were not flexible with our moving date. With the representation of the agent who had helped us to buy our house in 1995, we finally sold the old house at the end of July.

At the same time, we stressed because of the problems with the construction of the new house. First, we found out that loads of gravel were necessary to lift the house to prevent flooding in the spring. Then, one delay followed the next. Sometimes, I encountered workers sitting at the construction site because they did not have the necessary materials. Once, the architect called to tell me that the ordered tiles would not arrive in time for the four tilers who would come the following day. He expected me to go to a speciality store and order some that would be in stock, never considering that I always had to bring two small children along.


I always loved being creative with my children. With my painting supplies already packed, my children and I discovered a shop where we could paint pottery. One time, both kids coloured a piggy bank. Dominic picked a soccer ball and was careful to put the white and back colour of his design in the right areas. Christine, on the other hand, used lots of colours without planning and hesitation. I took my time to paint a plate with grapes. After we finished, she declared that her plane was perfect. Once the pottery was glazed and fired, I had to agree. Sometimes, it would be best for all of us to plan less and create with the enthusiasm of a child.

When we finally moved at the end of August, we only had cold water, were waiting for the kitchen appliances, and the installation of washer and dryer. We did not have any shelves in the walk-in closet until the beginning of November.

Over the next three months, instead of enjoying our dream home, we continued to live in a construction site. I continuously waited for workers who often did not show up. In the end, I did not even care anymore whether they installed the right materials. I just wanted them to leave.

By the end of November, we hired a lawyer because the construction did not move ahead. The inspector had failed our house again during what was supposed to be the final inspection. The costs exceeded the budget as building materials went missing or got damaged while the construction company was not cooperative. The nightmare affected my health. It was not a happy way to end the year.

In my next blog, I will write about the year 2005 that brought my biggest heartbreak.

Last week, I took the opportunity to spend the last warm day of this year painting outside with my friends Janis and Bob. We enjoyed being in nature and together, even though we were more than two metres apart.

Since March, we have spent so much time in front of our computers that it is even more important to take breaks. Spending time outside or at least away from our electronic devices will help you to re-energize and to avoid computer fatigue.

I hope you will get a chance for a break in nature this weekend. I will be back with a new blog post next week.

Going back to my dairies of the past twenty-five years is exciting, even though my life with two children resulted in more and more blank pages. I wanted to add entries but never found the time.

I started the year with a painting for the Arteast exhibition “Vessels”. I continued going to the life drawing classes and the drawing classes to improve my skill to observe and capture the objects on paper.

I was lucky that my parents came several times a year. During my parents’ winter visit, my dad collapsed at the cottage. We had assumed that my dad had a bad case of the Norwalk virus, but the doctor at the hospital was concerned about his heart health. However, the cardiologist did not detect anything unusual. It took years and other incidents until we found out that he had his first heart attack that day.

Even though my parents and sister usually stayed at the cottage, we debated whether we should start building a custom home on the lot that we had bought in Cumberland. Our townhouse did not offer room for guests, and the many stairs gave me a good workout every day. I could also hardly wait to have my own studio.

In preparation for the sale of our house, we had some renovations done and found out quickly how much fun it was to work with builders. De-cluttering and packing were also extremely stressful.

Planning our new house was a big challenge. I had a vision of our dream house, which turned out to be far out of our budget. Running around to order materials was also no mean feat with two young children. All this stress resulted in me getting one illness after the other.

Whenever I was frustrated, I took out my painting equipment. My goal was to create a new painting for every bi-monthly Arteast exhibition at the Orléans Library. For the May exhibition, I managed to finish an artwork of a bunny in a bed of crocuses.

I was also excited to participate in an exhibition with the life drawing group. At the same time, I stressed about the cost of $600 for framing of my four drawings. The “Skin Deep” exhibition at the Visual Arts Centre in Orleans looked very professional. I felt immensely proud to be a part of it.

I also submitted three paintings (Amsterdam, For Sale, and Teddybears and Tulips, renamed The Spring Bears) to the Arteast Budding Artist exhibition. They received a lot of positive feedback from the jury, which made me feel proud. My painting “Amsterdam” received the highest score of the three. I did not even remember the artwork when I looked through old photographs and have no recollection of the date of sale. 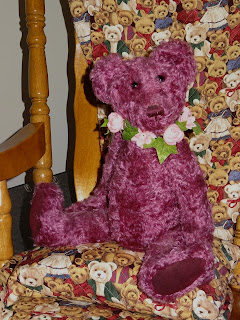 I continued to make bears, especially after a visit to the Teddy Bears on Vacation Show as I was brimming with new ideas.

On August 14, we experienced the big blackout. I was just in the middle of writing an email to one of my friends when we lost power. We decided to spend the time at the cottage where we enjoyed the quiet days. It was kind of romantic.

In August, I also started my painting "Sunflower" (see above) that Ingo loved so much that he bought it for his business. The focus was a sunflower in front of a sunflower field. A bee was sitting in the centre of the flower.

At the end of September, we had planned a big surprise birthday party for both our mothers who celebrated their 65th birthdays in the second half of 2003. It was one of the very few occasions when we managed to have both our families celebrate together. The event was not only a big treat for both mothers but all of us.

The highlight of the year was a three-week trip to Germany in November. Dominic, Christine and I flew together and experienced a wonderful pre-Christmas time, even though we missed Ingo and Jessie.

I finished the year the same way I had started the year, beginning the painting “Tranquility” only days before an exhibition that opened on January 6, 2004. I was thankful to be an acrylic painter because most of the time, I finished my paintings only hours before I had to deliver them for an exhibition. I have to admit that this urgency was a thrill, even though it also made me anxious.

Thank you for taking the time to read my blog. Please join me in two weeks for the sequel to my story.

Posted by Kerstin Peters at 21:28 No comments: