After I took a break in my walk down memory lane for the last couple of weeks when I wrote to you about the last two painting trips of this year, I will now return to the events of October 1995. For those of you who are new to my blog, I decided to dedicate most of this year's blogs to my experiences and impressions of Canada, the country which would be my new home after our move from Germany at the end of April 1995. I finished my last blog about my first year in Canada with the sale of our house. Please see the Blog of September 16, if you would like to go back to my story. 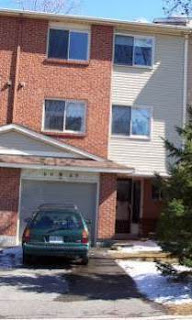 Just ten days before our wedding, our offer for a house was accepted. We finally had our own place to build our future together. I had a return ticket to Germany for October 20 and would therefore be able to arrange for our furniture to be shipped in time for the closing date. However, first we had more excitement awaiting us.

As I did not know anyone but Ingo's family here in Canada, we decided to have a wedding barbecue bash instead of the traditional bridal shower and bachelor party. We had a very nice evening with Ingo's friends and siblings at the Peters family home. As we did not have a lot of money, we had prepared everything ourselves with the generous help from Ingo's parents, who did not only offer us their house for the party but also bought the alcohol. Ingo's mother even baked a cake – actually twice, as the first one fell victim to a hunger attack the evening before.

I had not felt like celebrating at all after I had finally received a letter from one of my best friends. I had been uneasy for weeks as she has always been very thoughtful and communicative. We regularly exchanged letters even when I was still in Germany. However, I had not heard from her since our last meeting, not even for my birthday. She had had cancer a couple of times before and it had come back. I knew she was a fighter with a strong will to survive, but for the first time I had registered a bit or resignation in her words which made me very upset. I wished I could do more for her but all I could do is write a letter.

Just hours later, I received news that my mother had trouble with her sight. She had another appointment at the university hospital just two days before their flight due to the fact that her eye specialist had found out that she had lost almost all of her sight in one of her eyes. I was very worried that she would not be allowed to fly. However, there was nothing I could do but wait for her call after the appointment.

Due to the excitement in my own life, I did not really realize at that point that this would be a big problem in the years to come. It does not matter where I am, I always miss part of the people in my life, and often feel like an outsider when something happens to my family and friends in Germany. Even though I put a lot of effort into keeping the relationships alive, and while I am quite successful at it, I miss not being able to be a bigger part of their lives, both in happy and in difficult situations.

On our first Thanksgiving in Canada Ingo went to work to be able to take only one day of vacation for our wedding. It was a grey day, and the city seemed deserted. After work, Ingo and I explored the neighbourhood of our new house. It was really exciting: lots of parks, a path along the river that lead all the way to downtown, and even some tennis courts. We enjoyed walking through the forest. The smell of fall was in the air: it smelled of firewood and decaying leaves.

Afterwards, we enjoyed a feast of turkey breast in cider mustard sauce with apple pieces, a recipe we had found in one of the local grocery stores.

I was not aware that Thanksgiving was quite the family festivity in Canada with large turkey or ham dinners for the whole family. The three day weekend encourages Canadians to go one more time to the cottage and to enjoy the fall colours while hiking. The German “Erntedankfest” is only celebrated in the Christian churches, in general on the first Sunday of October. Usually the churches are decorated with produce to give thanks for a good harvest. In some areas, religious processions or parades are common. However, for most Germans it is of no importance.

In my next blog, I finally reach the highlight of 1995, our wedding in Mississauga in mid October. I hope you enjoyed my blog and are looking forward to finding out more about the wedding day, and whether or not my parents were able to attend our wedding.