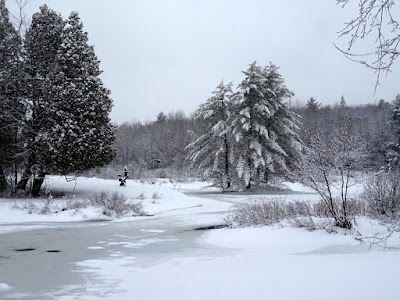 
This is the second part of my travelogue of the Plein Air Ensemble spring trip to Orford-Magog from March 31 to April 4, 2017. While Janis and I had already arrived a day early to get organized and were able to paint on the Friday, the rest of the group had their first painting day on Saturday. The following is my travelogue:


Unfortunately, it was no April Fools' Day joke. We woke up to heavy snowfall. As there was no way to paint outside, Janis and I drove around to check out possible spots to paint, hoping that it would stop snowing at some point. We started out on the Route 141 towards Ayer's Cliff, then continued to Stanstead, Rock Island, where the border to the US was in the middle of the town, Beebe Plain and then the Route 247 up again, passing through Fitch Bay. 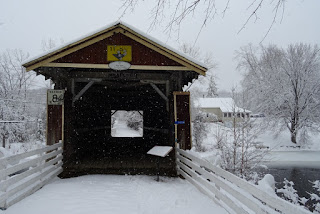 We stopped in Fitch Bay to look at the Narrow Bridge, a covered bridge with a beautiful view onto the partially thawed water. However, you could only guess the background as the mountains in the background were almost invisible in the mix of fog and snow. While we were taking photos, a pair of Canada Geese were swimming in the water and an otter stuck his head out of the water. Unfortunately, the sides of the bridge were totally closed and the inside of the bridge too dark to paint from there. 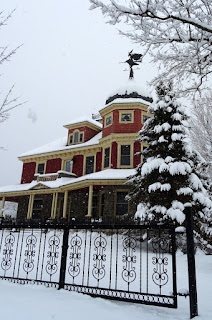 After a look at the Witch's House we continued our drive to Georgeville, a small town which we missed because there is only one small one-way street through the town centre.

The landscape was absolutely gorgeous, even though everything was white and visibility diminished continuously. The tree branches were hanging down from the weight of the heavy snow. Driving was difficult at times and we were glad that Janis' car had four wheel drive. 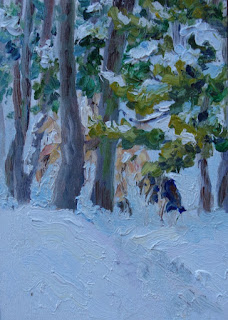 We had to accept that we would have to paint indoors if we wanted to paint at all. Reluctantly, we dragged our equipment into the meeting room. Janis painted the beautiful flower bouquet of daffodils and iris she had brought, while I decided to do a sketch of the woods around us. 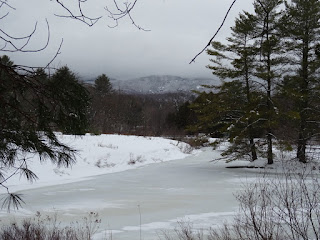 When it stopped snowing around 3pm, we went to the entrance of “Orford Music” terrain and painted the pond with Mont Orford in the back. We met our friend Bob there who was already busy creating watercolour sketches. We did not get far before the snow picked up again and forced us to head back inside. We would not have had much more time anyway because Janis and I had to prepare the happy hour.

In the evening we enjoyed a wonderful chilli – very appropriate for the wintery day. We finished the day with a game of Trivial Pursuit Art, a version that our friend Helene had prepared investing a lot of time with questions to art history, painting techniques, and art theory, as well as photos of paintings from Canadian artists, the Group of Seven, and international artists. We were laughing a lot, especially trying to figure out the Canadian artists which also included paintings of members of the Plein Air Ensemble. We all realized that we should visit the National Gallery more often to study especially the international artists.

To read the third part of my travelogue please return to my blog next Friday. If you know think anyone in your circle of friends and family members would enjoy my blog, please forward it. Thank you for helping me to increase my audience.