The Portrait of Jessie Blue

When I was approached by my friend Francine to paint her beautiful ragdoll cat Jessie Blue, I was very excited. I had not painted too many animal portraits lately, even though this is my biggest passion.

I went to see Francine and her cat to take pictures of Jessie Blue. I took about 20 pictures in different poses. Some with flash, some without. In addition, Francine gave me some of her favourite photos. After looking at all the photos, I picked the photos that seemed best for the project. It was up to Francine to make a decision. I told her my plan to take the pose of the body from one photo but with the head from another because I wanted Jessie Blue to look directly at the viewer.

This step is very important. We all remember certain poses of our pets when we think about them. For example, I can still see our dog Candy nudging me with her snout, looking at me with big eyes, when she wanted to be petted.

While Francine liked all of the photos, she did not recognize her Jessie Blue in all of them. In some she looked too dramatic, in others the pose I captured was not one she often struck.

Once, we had decided on the photos I would use for the portrait, I started my sketch and block in of colours. I was happy with my progress but wanted to compare the colours I had used with the real colours of Jessie Blue. Even if you use a very good camera, the colours of your pictures might be slightly different from reality. I was also concerned about her eyes that just did not look right. 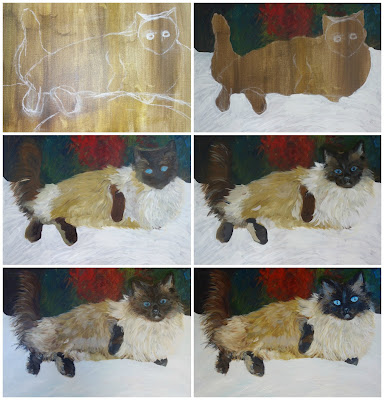 It was time to visit my model a second time. I brought the painting along to compare the colours. It was so wonderful to see how excited Francine was about the painting even though I was far from finished. This is such a treat for an artist.

When I met with Jessie Blue the second time, I made sure to concentrate on her face. Among the 25 photos I shot this time, I found the perfect one for her face. I adjusted the colours of her fur which were slightly too dark, then worked a long time on her eyes. Ragdoll cats like Jessie Blue have very light blue eyes. I painted over the eyes several times until I was happy with their shape and colour. For a while they turned out either too blue or too white.

When I was ready for the final adjustments, I met Francine again. She was very happy with the painting and had only a few suggestions for slight changes which were easy to accomplish. However, one of the hind legs seemed to be a problem. No matter what I tried, I did not get it the way Francine thought it should be, until she sent me another picture of her cat. While I had captured Jessie Blue with the bottom of her paws showing which are rather light, Francine envisions Jessie Blue's dark brown paws when she thinks of her. Once, we figured this out, it was easy to make the final change. That is why I encouraged Francine all along to make any suggestions. The portrait should not show my vision of Jessie Blue but be a reflection of Francine's vision. I am very happy that I was able to capture that. 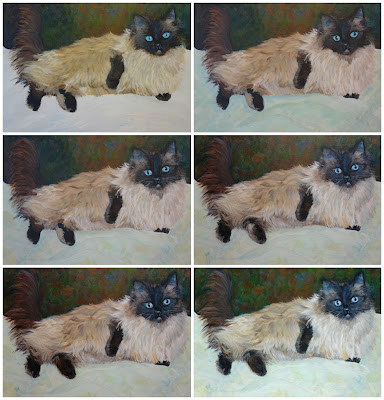 I would like to thank Francine for allowing me to write a blog about the creation of the portrait of her cat. If you are interested in having your pet painted in order to have a precious keepsake of your dear companion, please contact me at kpeters@domingoinformatics.ca. I will gladly discuss the process with you. In case you live far away or your pet is already deceased, I would ask you for a couple of photographs and would talk to you about his/her personality and your relationship to get a better knowledge of your bond.