For the next couple of weeks, I give you some more information about still lifes, a genre of art that has a long history. While still lifes were already found in the interior of Egyptian tombs of the pharaohs and Ancient Greek vase paintings, for the longest time pure still life paintings were one of the less valued painting genres due to the lack of people in the composition.

At first, still life objects were included in religious and allegorical pieces as well as portraits to support the focus of the painting. The rise in popularity came with the discovery of new continents in the 16th century that lead to an immense interest in the study of new species of plants and animals.

With the rise of the Impressionists and Post-Impressionists who were interested in the effects of light on nature’s color schemes, experimenting with brush strokes, tonal values, and colour placement, still lifes became less realistic but expressed mood and energy instead.

Over time, artists explored for fresh ways to create still lifes. They lost the interest in creating realistic still lifes and were looking for ways of abstraction. The illusion of perspective was replaced by objects constructed of flat shapes in bright colours, followed by breaking down the painting into geometrical shapes that found its peak in the works of the cubists who arranged the simple shapes of the deconstructed objects to show the object from different perspectives in one painting.

The Surrealists on the other hand explored the subconscious mind and painted their often distorted objects in fantasy scenes, making it seem that the objects were weightless and floating.

During the pop art of the 1960s and 1970s the sterile still lifes of mass production objects put the commercialisation of the products into the focus showing the attitudes of society rather than the characteristics of the objects. The objects lost their uniqueness and became interchangeable.

Nowadays, still lifes are created mainly for the depiction of the artist’s interest in the object, either to capture the beauty of the object, an interesting composition or the play of colours and shapes. In the past, many artists added symbols to express their view of mortality, religious and moral opinions as well as to use them to tell a story in allegories.

Next week, I will I will discuss the symbolism in still lifes. I hope you enjoyed my blog and return next week for the continuation. 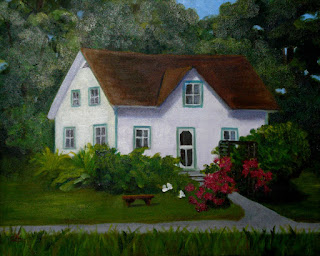 If you are interested in bringing a little bit of history into your house, this week's painting on sale is "The Duford House", a 16" x 20" acrylic painting of one of the buildings at the Cumberland Heritage Village Museum. The painting shows the house before a veranda was added to the front of the building a couple of years ago. The original price is $400. You have until Monday, September 11, 2017 at noon to purchase it for $340. To buy the painting, please send me an email to kpeters@domingoinformatics.ca. Payment can be made in cash, by check or e-transfer. Shipping and handling fees may be added depending on the destination.