I continue the countdown of my favourite artworks of the year 2019. As I paint a lot during my painting trips, it is not surprising that I created many of the artworks en plein air. Here are some artworks from the Ottawa area: 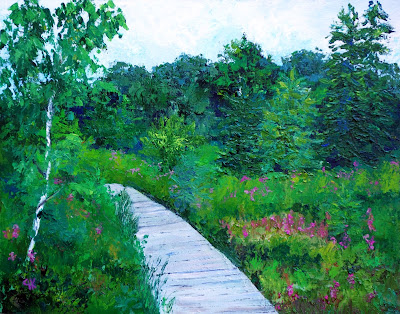 On July 4, I went with the Ottawa Plein Adventurers and Arteast to the Mer Bleue Bog. It was already hot when I arrived at 9:30 am. Most of us had decided to give it an early start as temperatures were forecasted to reach the low 30s.

As I had painted the lake area of the bog a couple of times before, I set up at one of the wider areas of the boardwalk and painted the bog with its beautiful pink flowers. At first, I was very comfortable under my umbrella and wondered about the warning of lots of bugs, but the warmer it got, the more horseflies started to attack me. It got so bad that they were sitting on my sunglasses, not caring about all the repellent I had sprayed on myself. I surrendered when I was using my brush more to swat away the flies than to paint.

I had a hard time to finish the artwork as I was struggling to have enough distinction in the hues and values of green to show different plants, and especially the transition from foreground to background. 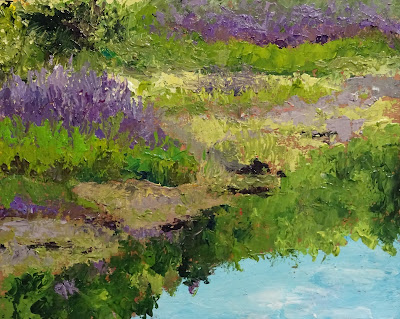 On August 1, I joined the Ottawa Plein Air Adventurers for an outing to Petrie Island. I love this little peninsula and would go there a lot more often if dogs were not prohibited. Walking around the trails, I found members of the group hidden in the spots that were in the shadow. To my surprise, I also ran into a woman whom I usually only meet in the gym at Zumba. We have gone for years to the same classes and never knew that we were both painters.

After scouting out the area, I decided to join her at a spot overlooking the calm water and little islands of purple water flowers. They became the focus of my painting. It was lovely to listen to the concert of the bullfrog and to watch turtles sunbathing. Families of Canadian geese were swimming noiselessly through the water.

At first, I was rather disappointed with my painting, but when I looked from a distance, I liked it. Therefore, I only added my initials in the studio. 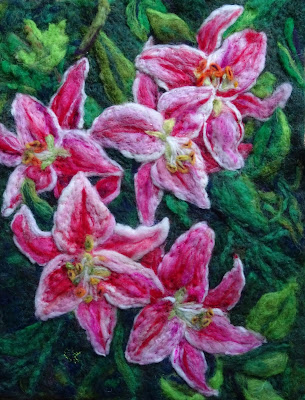 Sometimes, it takes a while to finish an artwork. Either you get stuck at a certain point, or you lose interest because more intriguing subjects attract your attention. It had been two years since I had last worked on the lilies. This summer, after I finished the felted tulips, I was ready to continue this felted artwork. I used mainly wool with some synthetic fibres and some embroidery floss.

Are you already looking forward to my top four artworks? I wonder if you would have put them in the same order. Maybe, you have a favourite that did not even make my list. I would like to hear which artworks touched you the most. Are there any that inspired you to pick up your paintbrush?
Posted by Kerstin Peters at 14:30