The Importance of Female Artists 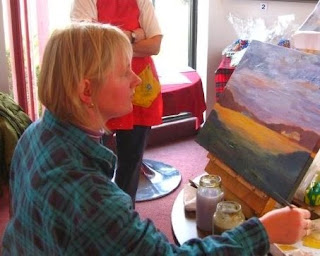 Last week, I wrote about my portrait “Mom” in connection with Mother's Day. This week, I want to continue celebrating women by looking at the accomplishments of female painters.

If you think about famous painters, I am sure the majority of names that come to your mind are those of male artists. This is no surprise as the art scene has always been dominated by men. When I checked online for the most famous painters, I found a list of 101 famous painters on http://www.theartwolf.com/articles/most-important-painters.htm.

On the list were only three women, at No. 49 Frida Kahlo (1907-1954) whose self-portraits express the pain she experienced throughout her life as a result of a horrible bus accident, at no. 85 Artemisia Gentileschi (1597-1654), a very talented artist of the early baroque era, the first female painter who became a member of the Accademia di Arte del Disegno in Florence, and at No. 97. Georgia O'Keefe (1887-1986) who is best known for her large-scale paintings of flowers.

There are probably different views on the ranking depending on the experts you ask but it is unlikely that this would change the number of female artists included in the list. So why are there so many women in painting classes and members of art organizations but the majority of famous painters are men?

Women have always been involved in creating art throughout history, but their works have often not been equally valued in comparison to the ones of their male counterparts. While the influence differed in various cultures and areas, their artistic works were often considered craft pieces, like many of the textile arts. These craft related works were usually not signed so there is no proof of the creator.

Moreover, the role assigned to women by society often created a big obstacle in receiving instruction, finding employment and venues to show and sell their works. The work of female artists was generally not accepted by society and especially their male counterparts who felt threatened by the competition and did not consider woman as able to create art as men.

The academic education required the study of the human body which was considered essential for the creation of realistic group scenes, especially for large-scale religious paintings. However, women were not allowed to study male nudes, and therefore had an enormous disadvantage. Instead, some female artists expressed themselves in other genres, like portraiture and still life, which were not as prestigious as large religious commissions.

Most female artists were of wealthy aristocratic circles or nuns. There are many examples of nuns who were involved in the illustrations of religious texts.

A lot of female artists worked together with their fathers and husbands who often received the credit for the work done under their supervision. However, most women - even up to the recent art history - have favoured marriage and the support of their husbands over a career as an artist.

Another reason for the lack of recognition of works by female artists were the traditional naming conventions which resulted in the wife assuming her husband's last name. This could lead to misinterpretation if the works were only signed by the last name. On top of this, art dealers even went as far as altering signatures to reassign them to male artists to increase the worth of a painting.

The feminist movement in the 1960s finally increased the interest in women artists and their academic study. However, male artists still dominate the art scene.

Judging art is very subjective but the gender of the artist should not be a factor in jurying the quality of a work.

When I visited the exhibition “Female Impressionist Painters” at the Schirn Kunsthalle in Frankfurt/Main, Germany, in 2008, I was excited about the many outstanding works, and puzzled by the fact that I had never heard of most of the artists before. In the meantime, my studies of famous artists has allowed me to learn more about other female artists. As many of my students are women and girls, I started including one female artist in every session. In the next two weeks, I will write to you about the two female artists I admire the most: Frida Kahlo and Emily Carr.


Do you have a favourite female painter? Has she influenced you? I would love to hear from you. Please feel free to post a comment.
Posted by Kerstin Peters at 14:30