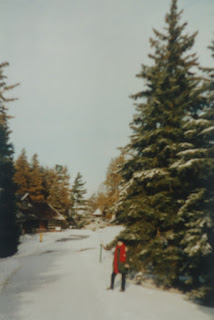 
This year I would like to start my blogs on a very personal note. With all the news about the Syrian refugees coming to Canada, it made me go back to my first days in Canada. While my situation was very different as I came from a wealthy and peaceful country where I had a very comfortable life, other issues I faced were similar to those the new refugees are facing.

The first time I came to Canada was in December 1994 when my later husband wanted me to meet his family for the first time. My husband is also German but had immigrated to Canada with his family when he was 10 years old. I met him in Germany while he was working there right after university.

When we met he told me about his plans to go back to Canada. Nevertheless, we fell in love and decided that we would go to Canada together. He promised me a land with a richness of nature, fantastic fall colours and white Christmases.

I was very excited to see this new world. I lived in a small town close to Frankfurt where the climate is more like the one in Vancouver. We usually have a lot of rain and dark days in the winter, which is rather depressing. If there is snow, it is usually not staying for more than a couple of days.

However, when we landed in Canada on December 21, there was no snow. Everything looked rather dried out and brown. We did not even have a white Christmas. The first snow came on January 1 and transformed the whole landscape into a winter wonderland. It was breathtaking.

Ingo and his family showed me as much as possible of their world. We had a wonderful outing to the McMichael Canadian Art Collection Gallery in Kleinburg, where I had my first encounter with Canadian art, and especially the powerful pieces of the Group of Seven and Tom Thomson. We visited Toronto with its CN Tower from which we had an unbelievable view even though there was a haze dome above the city despite the bright sunshine.

Although, I worked in Frankfurt at the time, I found the size of so many things just overbearing. Everything seemed to be supersized. There were those huge shopping malls, like the Eaton Centre and Square One, in which you could get lost, the big cars and monster houses. It was intimidating. There was a huge choice of products but if you did not have money - and we were saving ours to move to Canada the following year - this was not an advantage. However, I liked that you could go shopping until 9 pm.

At that time, the stores in Germany usually closed around 6 pm. It happened regularly to me that I was unable to get my groceries because I did not make it out of the office in time. Luckily, Ingo worked in a small town and was able to do the grocery shopping. In smaller communities, the stores and banks were also closed Wednesday and Saturday afternoons. All the stores except for the little convenience hubs at the gas station were closed Sundays. Most hairdressers did not open their business on Mondays.

I got my first impressions of the vastness of the land and the force of nature, when we visited the family cottage in Muskoka. While we could see the inside of the very rustic cottage, which was barred for the winter, we could admire the snow covered landscape and the partially frozen lake. It was so beautiful and peaceful. I could imagine why the family loved this space so much.

Another point on the sightseeing programme was Niagara Falls where we saw the impressive falls. The whole vegetation around the river was frozen under a thick layer of ice. It looked magical. However, the main street of the city resembled more a small Las Vegas with all the glitter and Kitsch.

Very different was my impression of the landscape on our drive to Niagara-on-the-Lake where huge parks and the deep turquoise water of the Niagara river gave a glimpse into the beauty of the region in spring when the trees are full bloom.

After my visit I was unsure of our decision. I feared that I would miss my family and friends too much as well as my independence. The big distances made it impossible to get from point A to B in Mississauga without a car, especially due to a lack of sufficient public transportation. Everything was available but in this supersized nation, I missed the small town intimacy. People seemed to live very anonymously. We hardly met any people in the neighbourhood, except if they had a dog.

However, I liked Ingo’s family and wanted to spent the rest of my life with Ingo so I decided despite my first reluctance to go ahead with the move the following April. I convinced myself that the beautiful nature that would awaken from this deep sleep would mesmerize me. I also had lots of ideas how to make sure I would stay independent.

If you enjoyed this blog and would like to find out more about my impressions and adventures after I immigrated to Canada, I would like to invite you to follow my blog again next week. I will add photos and images of my paintings that relate to the situations or places I am describing.