This is the continuation of last week's blog about the Plein Air Ensemble spring trip to Orford in the Eastern Townships.

Saturday, the weather had finally changed for the better. While the temperatures had dropped, we finally woke up to a sunny day. Hélène and I decided to go back to Bolton where we had seen the picturesque view from a bridge. However, it took us a couple of detours to get to the spot. First, we lost our way and ended almost back at our starting point, then we decided to paint the beautiful treed island on the route 423 in the morning, and the bridge in the afternoon.

It did not go the way we had planned. As we were not able to park on the shoulder of the road, we tried to get permission from the closest property owner to park our car in their driveway. When we did not reach anyone, we just parked the car at the entrance of the driveway. We had just carried our equipment to the side of the lake, when a neighbour approached us letting us know that this was private property and the owner would definitely not like us to paint there. Very frustrated, we packed our gear together. While most property owners are more than welcoming, once in awhile you meet someone who is less than thrilled about the idea of anyone coming even close to their property. 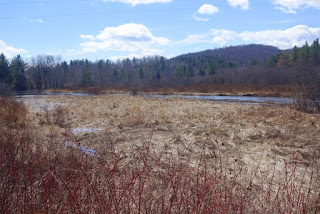 When we finally reached the bridge at Chemin de Bolton Centre it was almost noon. Each of us set up on a different side of the bridge. Even though the sun was shining, the wind was cold enough that I had put on my snow pants after a while. 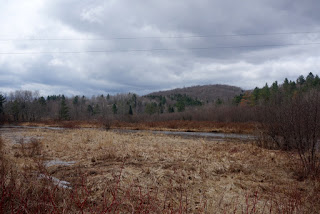 We only interrupted our creative process for a shared lunch before we continued until around 3 pm. As the sun had disappeared and dark clouds surrounded us, we chose not to start another painting. We had just started to pack our equipment back into the car when it started to rain again.

We checked out several other areas for painting potential but were not successful. While most areas were beautiful, they were not interesting enough for a painting. The best spots were on private properties, or the view was blocked by houses.

After happy hour, we were treated to a great demonstration of painting on tissue paper by our fellow artist Shernya. She uses these painted tissue sheets as backgrounds and starting points for her acrylic paintings. We were all so inspired that we would have eagerly tried this process right away. It is definitely an interesting technique I want to try out. 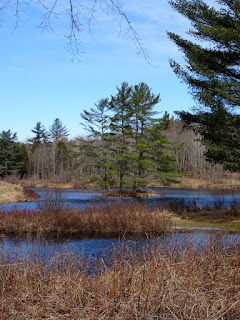 Sunday started out sunny again. However, the temperatures had fallen drastically and the wind was fierce. Hélène and I wanted to brave the cold and went out anyway. Our first stop was Lac Stukely where it was so windy that any activity was almost impossible. We decided to try our luck at the area of the Orford Art Centre but the only way to deal with the wind gusts was to paint from the inside of the car. Hélène and I created a watercolour sketch of the pond before we returned back to the hotel for lunch. 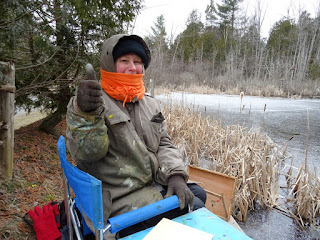 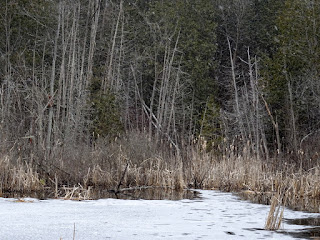 In the afternoon, we returned to Marais de la Rivière aux Cérises to paint one of the small ponds of the area. We even found a somewhat sheltered spot, but the air was still very cold. Nevertheless, we started painting even though it was difficult to warm up our hands. I had just finished blocking in the colours, when it started to snow. At first, we kept on going but when the snow picked up I just had enough. I was cold to the bones and just wanted to find shelter in the car. Hélène stayed not much longer.

We were both ready for a nice hot cup of chocolate and some downtime at the hotel. It turned out, we had been the only ones who braved the wind and low temperatures. Everyone else had stayed in the temporary studio in the hotel or painted from the car.

Being a plein air painter certainly has its challenges. However, on a bright sunny day it is just marvelous to be able to become part of nature. I just love to listen to the birds and the rushing water, the rustling of the leaves and the smell of fresh air.

Next week, I will finish my review of this Plein Air Ensemble painting trip. I hope you have enjoyed my stories and will return to my blog next week. If you know anyone who might be interested in my blogs please forward the link to them. Thank you in advance for helping me reach a bigger audience.