This is the last part of the travelogue about the Plein Air Ensemble spring trip to Orford in the Eastern Townships.

Monday was still very cold, with temperatures under -10 degrees in the morning. However, the sun was shining. Hélène and I went for a drive to Georgeville and Fitch Bay in the morning, hoping the temperatures would rise enough for painting outside in the afternoon. 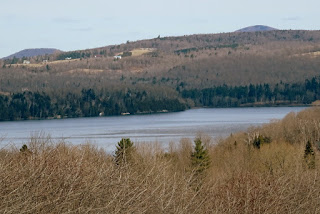 Georgeville is an English style village with a wharf, the St. George’s Anglican Church, and several houses, as well as a typical general store for the late 19th century. After exploring the wharf area, we continued on “Chemin Magoon” which has some great views of Lake Memphremagog. However, those views would be better for a fall or winter painting. Right now, the rather monochrome landscape did not inspire us for a painting. Instead, we saw a small waterfall. 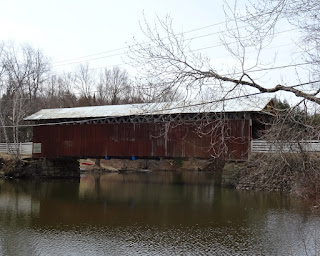 Before we settled for the waterfall, we wanted to see Fitch Bay and its witch house. The scenic route 247 led to the small village of Fitch Bay which had an ancestral home with a witch weather vane known by locals as the witch house. We also followed Narrow's Road to the covered bridge, another great site for a fall painting. 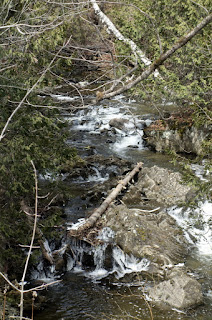 At the end, we went back to the waterfall. Even though the temperatures had climbed to -7 degrees, painting was hard. I had to go three times to the car to warm up my fingers and feet. As the painting was very challenging, I have to admit that my frustration rose. However, Hélène was on a roll, so we stayed for about two hours.

Later in the afternoon, we went back to the marsh in Magog, where I was able to finish the previous day's painting, even though the pond was again completely frozen. The day before parts of the surface were free of ice, and the falling snow melted even more of the icy surface. A very weird trick of nature. I still do not know how this was possible as it was below zero, but once the snow came, further parts of the lake were suddenly free of ice.

We just made it back in time to be at the hotel for happy hour. I am sure we set a new record for getting ready. Luckily, nobody came early.

Due to the long dinners, we had our show and tell before the meal. Even though the weather was not in our favour, everyone was able to produce a couple of nice paintings. Not all of them were created “en plein air” but most of them showed images of the Memphremagog region.

Hélène and I had planned to paint one last time on the morning of our travel day back home, but with temperatures of almost – 20 degrees considering the wind chill, we just packed our car and headed home. It definitely was a much nicer drive than on the way to Orford. The clear blue sky and the sun made hope of the spring to come but it also made everything look washed out. The colours were a lot more intense in the rain.

It is sad that the time passed so fast but we will see each other again on our fall trip at the end of September when we will go one more time to the Opeongo Mountain Resort in Eganville. Ontario.

I hope you enjoyed my travelogue. I can easily recommend the region for everyone who loves nature. There are so many hiking paths, ski hills, lakes, and tourist attractions that there is definitely something to explore for everyone. We will definitely come back.