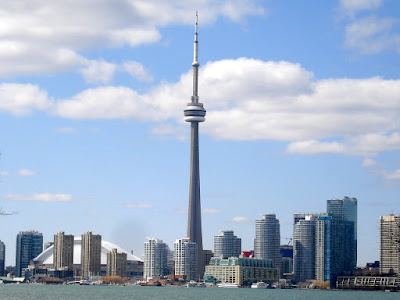 After our return from the trip to Vancouver, Ingo and I knew that we did not want to move out west. Even though most of the places we saw were beautiful, we had not seen a city where we could imagine to start our new life. As Ingo had wanted to wait to see how I would do on the job market, we had to realize now that our only chance to stay was for him to find a job. My chances to find employment were basically nil. While we waited for responses to Ingo's applications, we continued to explore the area around Mississauga which we both did not like. It did not seem to have a soul, no town centre to speak of, if you did not consider the huge shopping centre Square One as the meeting point. It had the feeling of a big sleeper city where people had their houses, went shopping, and out for casual dinner. There was no cultural centre either, the Living Arts Centre was only opened in 1997. Toronto had so much to offer that most people went there for their entertainment needs.

I could also not see myself living in Toronto. It had so much to offer, but it was just too big and busy for me. I came from a small town with a population of less than 10,000 people. Even Frankfurt, where I worked, had only about 650,000 residents in 1995, while Toronto City had already more than 2 millions.

Nevertheless, we kept exploring the area, especially with regard to the fact that we did not know where Ingo would find a job. As Ingo's parents had bought us a tandem as an engagement gift, we used the bike to get around on the great system of bike trails. Toronto is beautifully situated along Lake Ontario’s northwestern shore. We loved the many parks along the lake.

We enjoyed the diversity of cultures during the Festival Caravan, a multicultural festival where the various ethnic communities living in Toronto shared their culture with others. It was a chance to break down barriers between different ethnic groups, inviting others to get to know their traditions. The communities showcased their food, dance, crafts, and clothing. To me, as a foreigner looking to find my identity in a new world, this was fascinating and encouraging that others had adapted and still kept their traditions. It felt like we travelled the world in a couple of hours. While heading from one pavilion to the next, we did not only see the shiny side of the city, but also such rundown areas which made me happy to be in a bus.

On another day, we took the ferry to Toronto Island. As we had brought our tandem, we were able to drive all over the island and managed to see areas that Ingo had not even seen before. I loved the houses on the island. Some looked like artists studios, quite rundown but with a certain charm, while others had beautiful flower beds. We enjoyed being able to take the time to explore the island, including making time for a picnic and game. 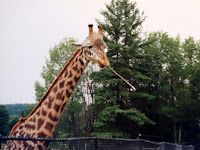 Needless to say, we also went to Canada's Wonderland, the Toronto Zoo, the Stratford Festival, and on a whirlpool jet boat tour on the Niagara River. While I loved the zoo with the beautiful animals, I was not a fan of the two other kinds of entertainment. I loathe roller coasters due to my severe motion sickness and my fear of heights, and I do not enjoy water crashing over my head.

By the end of June 1995, Ingo had found a temporary position to help out a friend of his father's with his computer needs. This was great because we could certainly need the extra money. On the other hand, it left me alone at his parents' house. His mother introduced me to a creative group she belonged to. The mostly older ladies prepared crafts for the church Christmas bazaar. However, the first meeting went only well until I saw the house owner's big hunting dog. Luckily, my mother-in-law was sympathetic enough to take me home. 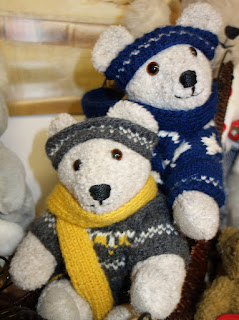 I did not really feel lonely. I actually enjoyed some moments of solitude. I was not used to constantly be together with another person. I really focused on my design of teddy bears and was happy to see that the materials were a lot cheaper than in Germany. Unfortunately, I could not find some of the materials I was used to, but I was optimistic that I would be able to sell the bears at double the price of their material costs. I even looked for possible venues to sell my bears, and was happy when I found a store where artists could rent a space to display and sell their crafts. There was at least an option for an alternative career.

In retrospect, this was all very naive. Even if I did not go back to an office job, I would still need a residence permit. I was in Canada as a visitor. I guess by the beginning of July, Ingo and I started to reconcile with the idea that we would have to go back to Germany after the six months.

Thank you for following my journey. To find out how we finally ended up in Ottawa and have lived in the region for more than 21 years, please continue to follow my blogs.