The Big Adventure – part 14: From Calgary to the American Border 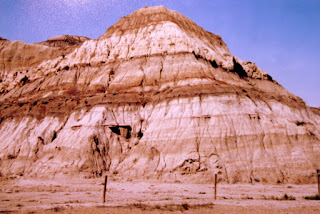 When we left Calgary, our next destination was Drumheller, the former territory of the dinosaurs. The further east we drove, the more the meadows disappeared. Finally, the farmland turned into vast areas of dry land. It looked very desolate. First, we visited the Rosedale Swinging Suspension Bridge that crossed the Red Deer River. On the opposite side of the river we could already see the “hoodoos” of the Canadian Badlands, mushroom shaped geological formations which were formed by erosion caused by water and wind. The “Dinosaur Trail” went through these fantastic rock formations. To reach the other side of the river, we had to take a small ferry. 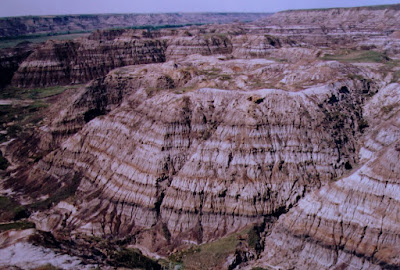 At the end of our round trip, we found the “Little Church” which was hardly bigger than Ingo. Only six people fit inside at a time. There was no altar but Christian Music was playing. What a great place for prayer or meditation!

In the surrounding fields, Ingo and I saw many small animals the size of a hamster. They had light brown fur and were playing and cuddling together. What a sweet sight! I still do not know what kind of animals they were. Does anyone know the answer?

We continued to Bassano where we enjoyed a combination of lunch and dinner. It was already 6 pm, and we had been so immersed in the sights around us that we had not made time to eat. While we were enjoying our food, we saw a young man sitting under a tree. Shortly after, he was lying on the stairs in front of the toilets. As it turned out, he had biked from Calgary and overdone what he was capable of. We gave him some salt pretzels and grapes which he could not keep down. Then, we stayed, and talked to him until he felt better. 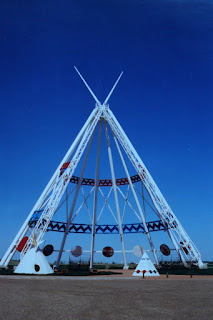 Unfortunately, we could not go to the Dinosaur Provincial Park anymore, but we continued to Medicine Hat where we spent the night in a motel. Our room was huge, and it had a desk and even a refrigerator. We definitely got more worth out of our money outside of the big tourist destinations. Even if a bottle of carbonated water was still extremely expensive. The cheapest 0.75L bottle we found at a store cost still almost $2. It was just not an item that was much in demand at the time. Nowadays, you can buy all kinds of different sparkling waters in the grocery stores. Ironically, by now I have switched to plain water, mostly out of the faucet. It seems that you adapt to your surroundings, even if you do not notice it. 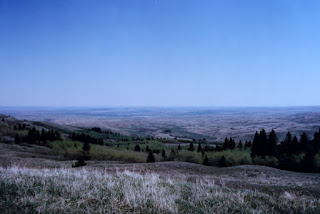 The next day, we drove to the Cypress Hills Provincial Park. The landscape changed from flat to rocky. Everything was so quiet. You could just hear the leaves rustling in the wind and the birds. We saw a couple of free running cows, and later a coyote or maybe even a wolf. We passed two beautiful lakes: Elkwater Lake and Reesor Lake. I loved the mix of the dark greens of the conifers and the fresh greens of the deciduous forest.

Once we passed the Battle Creek, the road got worse. First there was gravel, but soon the road was more appropriate for a four wheeler. The rutting tore off part of the splitter of our car. We had to leave the car a couple of times to move boulders out of the way. If it had rained it would have been quite the muddy adventure. We even had to drive through a small creek before we finally reached the highway again. Somehow, we must have missed the right road suggested by the “Canadian Book of Roads”. We definitely saw areas of the park that are usually not visited by tourists.

On the highway, we saw a sign advising us that there would not be any settlements or gas stations for the next 134 km. A perfect time for a nap. I woke up when we reached the border to the United States. For the next two days we drove through Havre, Malta, Culbertson, Williston, Bemidji, Minot, Rugby, Crookston, Duluth, Wakefield, Marquette, along the Lake Superior through Christmas and finally back to Sault Ste. Marie in Canada.

While this was a beautiful part of our trip, I will continue my travelogue next week with our stay in Sault Ste. Marie as I am writing about my first impressions of Canada.