Back to a Routine

In the middle of August 1995, Ingo started to work for the new company in Ottawa. Ingo had to adjust to the new environment. He was used to a small company where everyone was friends with each other and worked together as a team. In his new company, he sat in an open space office, and everybody worked for themselves. He had to make himself familiar with the new programmes and platforms. Therefore, he spent the nights reading technical literature. He was definitely a little frustrated.

I, on the other hand, enjoyed myself. I checked out the shopping centres in the downtown area looking for a wedding dress, china, and books. In all the clothing stores, the fall and winter wear was already available. It felt strange when the temperatures outside were around 30 degrees Celsius, not counting the humidity. However, I had heard that temperatures would drop down to –25 degrees Celsius in winter. I was from an area in Germany with a similar climate than Vancouver, therefore I needed to invest in proper winter wear like long underwear and snow boots. The leather boots with lambswool lining that I had bought in Germany would probably not be warm enough.

I had no problem to fill the time. I was the perfect housewife. In the morning, I made breakfast, prepared Ingo's lunch, cleaned the apartment, and did some exercise. The afternoons were filled with writing letters, learning Spanish, sewing teddy bears, computer work, writing in my journal, and last but not least planning the wedding. Setting up the budget made me very aware of our tight budget. However, it could not dampen my excitement.

The weeks just flew by. On the weekends, we continued to look at houses in different areas of Ottawa. After a short time, we fired our agent because we could not stand his sexist remarks any longer. His remark “Ingo, why do you need a dishwasher when you are about to marry one?” was the last straw. Luckily, we found a terrific female agent who not only helped us to find a house but stayed a friend for years to come. 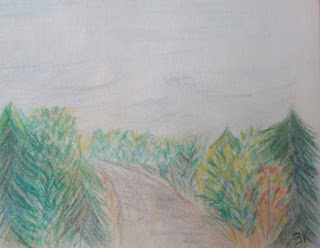 On the long weekend of September, we drove once again to the cottage in Muskoka. Autumn was in the air. To avoid the traffic jams, we got up at 4:45 am on the Saturday morning. I am a night owl, but I have to say the sunrise and the slowly lifting fog were so breathtaking it was worth the early departure.

At Algonquin Park, the leaves had already started changing colours. I found it interesting that some trees or even only one branch were already dark red while most of the foliage was still green. I could just image how beautiful the area would look a couple of weeks later.

The temperatures in Algonquin Park and Muskoka were already slightly lower than in Ottawa. In the morning, it was downright cold. However, in the late afternoon, the sun came out for a couple of hours and it was just beautiful to be on the deck. I was sad that I had only brought my coloured pencils. I would have loved to paint the rays of sunshine mirrored on the water's surface.

In the evening we sat at the fire and grilled our dinner. Then, we sat together with Ingo's siblings to play card games. It was just the perfect cottage experience.

The next morning, we went swimming before breakfast. The water was still 22 degrees Celsius. My in-laws thought I would not be up to the challenge but I was used to colder water as my mother never set the temperature of our pool above 21 degrees.

Ingo's father had been kind enough to make reservations for our wedding lunch, but Ingo and I had to pick the menu. It was not that easy as the menu was quite exotic for my taste. I have to admit that I had not been very eager to try new foods, even though I had already expanded my diet when I had a Turkish boyfriend. I have come a long way since then.

At the end, we picked an antipasti plate, followed by agnolotti filled with spinach and garlic. I also insisted on a wedding cake, even if it would only be a small one. For my sweet tooth that was a must-have. 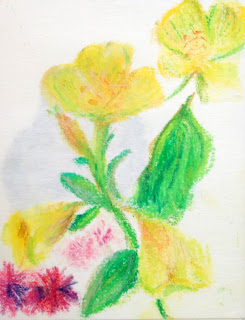 In the beautiful sun, Ingo and I even went on a long canoe trip with Ingo's dad, including a portage. I could have kept on going and going. It was just so beautiful to glide through the calm water, but the two men finally had enough. They were exhausted. Could it have been because they were paddling while I was drawing? Drawing is also quite the workout. You really have to look at things, and then concentrate to create the impression on paper.

On the way back to Ottawa, we stopped again in Algonquin Park. I have never been a big hiker, but the Canadian landscape just pulled me in. We went on the beautiful Booth's Rock Trail. Our first stop was Cooper Lake where we could hear nothing but the wind. I had never experienced such silence. I observed a dark red dragonfly sitting on a rock. That was exactly how I had imagined the wilderness. We went up a steep path to the cliff of Rock Lake. The view was just breathtaking. You could see the whole valley around Rock Lake. The lake was glittering in the sunlight and the leaves had started to change colour. Unfortunately, a group of bawling hikers disturbed our paradise. Why is it that some people cannot even respect the peacefulness of nature and have to bring the outside noises with them?

While trying to shake off the group, we missed the second lookout. When we were on our way to the old ruin, which was hardly visible anymore, we came through a field, where the bees hummed so loud that we thought we were encircled by a bee swarm.

The last part of the hike brought us to the old railroad. Unfortunately, the old railroad ties had been removed to make space for a trail. We reached the parking lot exhausted but very happy.

This was the last trip before our return to Mississauga for our wedding. The countdown was on. It was only slightly more than a month until my parents and sister would come to Canada. Luckily, we had mostly great weather and could continue to explore the capital region. If you would like to hear my impressions of the area's natural treasures, please return to my blog next week. Thank you for following my adventures. I appreciate the wonderful feedback I got so far. If you know anyone who would be interested in my story, please forward my blog. Thank you in advance.