The Big Adventure - part 1: From Mississauga to Nipigon 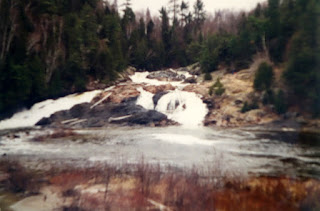 
On May 10, 1995, Ingo and I started our trip from Mississauga to Vancouver. I was fascinated by the huge rocks on both sides of the roads, the many lakes and the vivid greens of the spring landscape. I noted in my journals that I would love to live here if I were an animal.

Our first stop was Parry Sound where we climbed up an observation tower from which we had a fantastic view over the Georgian Bay.

Following the Georgian Bay, we drove through Sudbury to Sault Ste. Marie. This part of the road was like a slalom course due to the many potholes. Nevertheless, the route along the Lake Huron was breathtaking and very calming.

We decided to stay overnight in Sault Ste. Marie. When we arrived around 9 PM the city seemed deserted. It was quite cold with a fierce wind.

While in town, we visited the Ermatinger House, the mansion of a wealthy fur trader of the 19th century. The stone building was professionally renovated and hosted the original furniture. Ladies in area costumes guided us through the rooms. 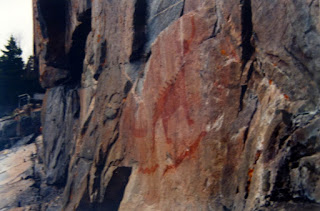 Following Highway 17 we continued to Lake Superior Provincial Park, where we visited the impressive rock paintings of Agawa Rock. The sacred pictographs of animals, canoes, and people were created by the Ojibwe Indians. It was an adventure to walk along the unsecured path along the cliff-face rising high above Lake Superior. While the path was rather flat, some of the the rocks were quite slippery.

Our next stop was Wawa, which is a small community situated on the Trans Canada Highway between Sault Ste. Marie and Thunder Bay. The name comes from the Ojibwe word for "wild goose", wewe. As many visitors, we wanted a picture of the famous giant statue of a Canadian Goose, the landmark of the town. However, instead of the original which is situated at the entrance of the town we took a picture of the wrong wild goose, one sitting on the roof of a motel. We only found out about our mistake when we saw a newspaper article with the picture of the real goose. Too bad! I guess we are not good at chasing wild geese.

Making our way to a picnic area in Rossport, I was terrified, and in tears when a big athletic dog ran barking towards us. This was not the last time that I would be confronted with my deeply rooted fear of animals, and dogs in particular. Despite this incident, we enjoyed a nice picnic with view of the bay and the softly rippling water.

On our way to Nipigon where we spent the second night, we drove towards the sunset. The sky was dark purple and the dark orange ball of the sun bathed the landscape in a warm light. Breathtaking!

I was at awe at all the beauty we saw during our drive along the Lake Superior. Such vast areas of pure nature, and water everywhere. Once we entered Lake Superior Provincial Park, there were hardly any populated areas. From time to time, we saw a couple of houses. I was wondering where these people worked. They had to drive hundreds of kilometres to go shopping. Kids would be hours on the road in their school buses. Would there be any medical care?

The vastness of the land was just unbelievable. How could we still be in Ontario? I have to admit that I did not know much about Canada before I came here. I had never been outside of Europe. Once, we had decided to move, I received a couple of books. However, it it is one thing to see images of Canada in a book and another to experience the size in person while driving through this big country. Ontario alone is three times the size of Germany. You can cross Germany from North to South in about twelve hours by car. In no time can you travel to all of the other European countries.

What has been your furthest trip so far? Maybe, you came to Canada as an immigrant. What were your impressions and struggles? If you enjoy my experiences as a visitor to Canada, please come back to my blog next week.