The Big Adventure – part 2: From Nipigon to Kenora 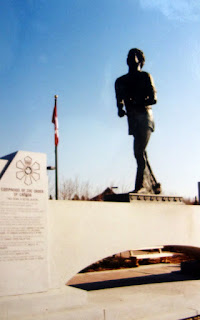 Last week, I started to write about the trip my future husband and I took from Mississauga to Vancouver. We wanted to see as much of the country as possible and took our time to reach our destination. Ingo wanted to show me “his” country and hoped I would love it enough to stay in Canada with him.

During the first two days of traveling we make it to Nipigon where we spent the night. The next morning, there was not a single cloud in the sky. First, we visited Thunder Bay. Immediately at the entrance of the town, we spotted the Terry Fox Memorial, from which we had a phenomenal view over the bay and the city. This was the first time, I heard about the courageous young man who tried to cross Canada on foot at the age of 18 years to collect money for cancer research. This alone would be more than remarkable, but it was even more sensational because he had already lost one leg due to cancer. He made it almost to Thunder Bay, all the way from Newfoundland in the East of Canada, when the cancer forced him to give up.

At the nearby Beaver Post Shop we saw amazing craftworks from aboriginals, like mittens made out of moose leather and the prices reflected this high quality craftsmanship. Too expensive for a couple who gave up their well-paying jobs for a new beginning. Instead, Ingo bought me a small amethyst as a souvenir.

The landscape started to change on our way to Ignace: there were vast areas of deforestation as well as many dead trees. It was very sad to see even though we also saw areas where saplings promised a return of forests.

Due to the change of time zones, we had an hour and decided to continue to Winnipeg. While looking for “Golden Rock”, a ghost town from the mining boom we got lost and ended up on a feeder road of a highway which would have been declared merely a farm road in Germany. It took us about half an hour on this gravel road before we reached a paved road. This little detour also made us miss the sight of Dryden's statue of Max the Moose.

Closer to Kenora, along the Lake of the Woods, the scenery was breathtaking again. I wish we had had time to go for a walk but we wanted to reach Winnipeg before darkness.

Once we crossed the border to Manitoba, the landscape changed. First, there were still some deciduous trees along the road but all at once even these disappeared from the scenery. The highway is straight as a die, framed on both sides by fields. It was very tempting not to race along as if we were on the German Autobahn.

Thank you for your interest. If you would like to find out what awaited us in Winnipeg, please make sure you return to this blog next week again. You can also subscribe to this blog so that every update will directly be send to your email address.