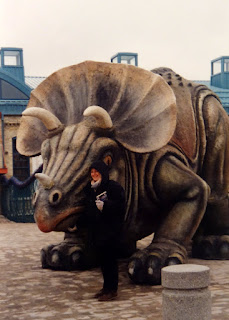 This week is part 3 of my travelogue of the trip from Mississauga to Vancouver. On our third traveling day, we made it from Nipigon to Winnipeg.

When we reached Winnipeg, I was shocked about the number of fast food and family restaurants. I had never seen anything like it. Each restaurant chain did not only have one site but another one every couple of hundred meters. I already had the impression that Canadians ate out a lot more often than Germans. The sight of all these restaurants made me wonder if the people in Winnipeg even had a full kitchen or just a huge refrigerator to cool their coke bottles.

We went for dinner in a Chinese restaurant with cheap red plastic chairs and light brown tables without tablecloths, but bright plastic flowers in a flower bench to divide the room. The dinner matched the decor: The mediocre food was carelessly heaped on our plates. Definitely, not what I was used to from the Chinese restaurants I went to in Germany, where a lot of effort was put into the atmosphere as well as into the presentation of the food.

When we finally reached the hotel room which had a big bed, sofa, desk and TV, I was exhausted from all the impressions of the day.

The next morning, we woke up to heavy rain and temperatures, which were hardly above 0 degrees Celsius. We were sure we had made a trip back in time. Winter in May was a new concept for me. In the Rhine-Main area where I am from, the weather is rather mild, with temperatures between 9 and 20 degrees Celsius in May. Even in winter, there are hardly any days where the temperature is below 0 degrees.

We had planned to spend the day in Winnipeg, but many of the sights were closed until the beginning of June. Our visit to the Forks, a must-see attraction according to the tour book was a disappointment. Only the foundation of the forts was visible, and it was unbearably cold.

Our next stop at the Assiniboine Park did not lift our mood either. The park was fantastic but on a day when you wouldn't send out a dog, we certainly did not want to walk in a park and watch the animals. Unfortunately, we did not find the conservatory which houses a botanical garden with thousands of exotic plants.


When we continued our drive, we saw snow covered fields and even had a snow shower. I was frustrated, especially with regard to the fact that the temperatures in Germany had been already in the mid-twenties since the end of April.

A detour brought us to Minnedosa, a beautiful small town which resembled a town in the Italian Alps.

Crossing the Riding Mountain National Park, we were rewarded with a beautiful landscape. There were so many lakes, most were still completely frozen. Suddenly, a moose appeared on the side of the road. We stopped and were even able to take a picture which did not turn out too well but at least we could prove that we saw a moose.

We continued our way through the Duck Mountain Provincial Park. From the tower of the Baldy Mountain, which is with 831m the highest mountain in Manitoba, we had a fantastic view. I thought the mountain looked more like a hill. It is surprising that everything seems to be so gigantic here in Canada but when it comes to mountains, they seem pretty small compared to vastness of the land.

The park was mainly undisturbed by humans. We saw another moose and some deer which appeared only meters away. I found them as fascinating as the many frozen lakes which were glistening in the sun. The weather had improved the further we drove north, even though it was still quite cold.

At the end of our trip through the park we almost had to turn around because of the high water which had resulted in some road closures. It seemed we had reached the end of the world. On both sides of the road there was nothing but fields. Many of the small towns had longer names than you could pronounce before you had crossed the town. We spent the night in Quill Lake, a small village in which we could not even find a restaurant. Our delicious dinner consisted of chips and sweets.

Do you have any tales to tell from winter weather after the end of April? I would like to hear what weather stories you have to tell.

Please return back to my blog next week, when I continue the travelogue with the next leg of our trip which brought us to Edmonton.