The Big Adventure – part 5: From Jasper to Valemount 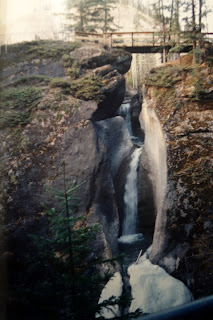 When we left Edmonton it was raining, but just as we reached Jasper National Park the rain had stopped. Our first stop was the Punchbowl Falls, where the Mountain Creek cascades down a cliff, and has eroded a narrow channel in the rock and finally drops into couple of natural pools. Even though I was curious to see the cascades, I was afraid to meet a bear after I had read a newspaper article about a grizzly bear attacking two hikers. At the same time, I would have liked to see a bear from the security of a car. I love bears and had been very active making teddy bears at the time. It would have been so great to see one in person.

Afterwards, we went to the Miette Hot Springs, the hottest springs of the Rocky Mountains. The water flows from the mountain at 54°C and smells strongly because of the high amount of sulphates in the water. We could even see how yellow the rocks were from where the water cascaded down. The water is then cooled down to 40°C for the hot spring pools.

As it was starting to get dark, we continued on the indescribably beautiful road to Jasper. All around we saw the huge Rocky Mountains, which were partially covered by snow. There were many lakes and creeks, and lots of moose and deer. Magical!

Looking for accommodation was not an easy task in Jasper as it was dark, and Jasper is a rather expensive place. I was not too impressed with the inn because we did not have our own bathroom. As someone who had never been camping and was not used to more rustic accommodations, I was not too thrilled about it. However, after a good night's sleep I had to admit that everything was spotless and furnished with love, even if a little bit old-fashioned. There was a big comfy bed, a sink with gold fixtures, green wallpaper, a rose coloured carpet, and a TV. Even the towels and a flower print were colour-matched. Then there was the view of the mountains… Just amazing! 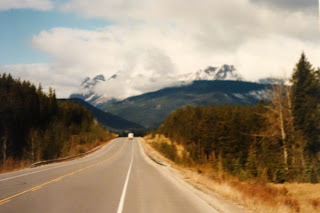 In no time we reached Mount Robson Provincial Park. The landscape was still beautiful but we did not see any more animals. We had finally reached British Columbia and crossed the last time zone.

The landscape got greener and greener once we left the park. The further we went southwest, the more signs of spring we saw: blooming bushes in violet, fields full of yellow flowers, and lots of young animals which grazed with their mothers on fresh green pastures. In the shelter of the mountains the climate seemed to be relatively mild, and everything looked so peaceful. A wonderful place for a vacation!


In Valemount, we stopped for groceries. The first store we entered was a bakery. I could not believe they dared to call it a bakery. There were not even fresh rolls for sale, let alone any pastries. For someone who comes from Germany, the "bread country", where bread is part of the culture, I could hardly believe that people would eat these squishy white Canadian breads. Germany produces more varieties of breads than any other country with over 300 varieties of dark and white breads and over 1,200 varieties of rolls. Bread is an important part of the daily diet. Many Germans enjoy rolls and slices of bread for breakfast and dinner with cold cuts, and cheese. Honey, and jams or often added as a spread for breakfast. Even today, after more than 20 years, I have not adjusted to the texture of soft breads and rolls. I am glad for the increased varieties of heartier breads which have become available within the last couple of years, even though my husband bakes most of our bread. I have to admit, that every time I go to Germany, going to the bakeries is still one of the highlights of my visit.

Is there anything you miss from the country or region you originated from? Do you hold on to traditional recipes or have you changed the way you eat according to what is offered as convenience and comfort foods?