The Big Adventure – part 4: from Quill Lake to Edmonton


This week, I write about our trip from Quill Lake to Edmonton as part of our big adventure to get from Mississauga to Vancouver.

Our first stop around midday was Saskatoon where we walked a little bit through the city. In Battleford we wanted to visit the Western Development Museum which contained a reconstruction of a 1925 Saskatchewan town. Disappointingly, the museum was closed.

In Lloydminster which belongs to about 40% to Saskatchewan and to 60% to Alberta, we visit another of the many McDonald's. So far we had at least one meal at a McDonald's at any of the provinces we crossed. Interestingly, the prices for the menu items differed depending on the location. This less than healthy diet was probably one of the reasons why I had lots of stomach problems during our trip. These days, I cannot believe how we managed to eat that often at fast food restaurants. My constant stomach problems during the trip were probably due to all this unhealthy food. 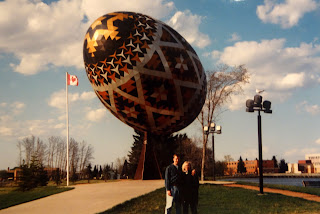 When we arrived in Vengreville, we visited the biggest Easter egg of the world at Elk Park. This egg called Pysanka in Ukrainian, was installed in memory of the Ukrainian settlers and the Royal Canadian Mounted Police, who protected them. The designs on the egg symbolize wealth, a good harvest, and security.

The landscape had changed. Everything was very green. Most of the trees already had green leaves – quite the difference to the winter landscapes of the day before. Without the wind, we could have worn shorts and T-shirts. Something the locals did. This must be a Canadian phenomenon which I have since witnessed in different Canadian areas: The moment the sun warms the air enough for temperatures to rise above 10 degrees, many Canadians put on shorts, T-shirts and sandals or flip-flops. Considering that the winter temperatures fall below – 20 degrees, these temperatures are almost balmy. 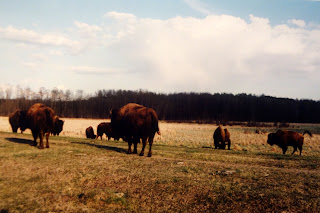 Another sign of spring are the young animals, especially calves, lambs, and foals. Very sweet! This was the first day, we saw a lot of animals. Just before Edmonton, I saw a herd of cattle. At least that is what I as a city dweller thought. In reality, it was a herd of bisons. I had never seen a bison before, and Ingo was as excited because he had never seen one in the wild before. It was impressive to see the big herd of these big animals just meters away from us. We were only separated by a fence.

When we finally arrived in Edmonton, we were too exhausted to visit the city. However, we had a fantastic view from our hotel room which was so big I could easily do some exercises, which felt really good after sitting day after day in the car. 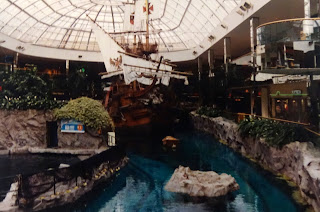 The next day, we went to the West Edmonton Mall, which was still the biggest mall in the world at this time. Aside from the hundreds of stores, there was a lake, which was big enough so that people could dive in it, and contained a big ship and submarines as well as a aquarium for dolphins. This was unbelievable. However, everything was closed. How frustrating! Luckily, we found out that the mall would open at noon on a Sunday. To pass the time, we went to the Muttart Conservatory. It had four glass pyramids house the botanical garden, each pyramid with plants of different climate zones. I was fascinated by the mighty cacti.

Back at the mall, the shops pull of all the stores was immense. We limited our sales to a pair of hiking boots for Ingo, sunglasses, and an Alaska bear, a polar bear in a leather parka and boots with a fur trim. As a teddy bear collector, I could not resist even though I was heavily involved at making teddy bears.

The number of offered goods was overwhelming. While it seems a buyer's paradise, I found it all too much, especially if you do not have any money to buy things.

When we left the mall again, it had started raining. Our next destination was Jasper.

Thank you for following my travelogue. Please share it with friends and family who might be interested in my story. I invite you to return next week for the continuation of the trip.