Our first morning in Vancouver started with rain, but it did not take long for the sun to come out. The city reminded me a little bit of Hamburg with all the ships but with a milder climate. The smell of the sea, the sea gulls and crows looking for mussels (and unfortunately garbage) reminded me of the island Sylt in the North Sea. However, all around I could see the mountains with snow covered peaks. Everything was in full bloom. I discovered many flowers I knew from Germany, even a bleeding heart. 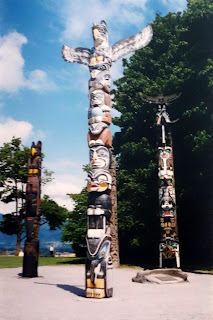 Our first destination was Stanley Park. We saw many totem poles during our stroll, which had not caught my interest before. However, they are amazing examples of wood craft. Each totem pole contains symbols which tell a story.

We immediately discovered that people were a lot more active in Vancouver. We saw lots and lots of people on bicycles and roller blades. 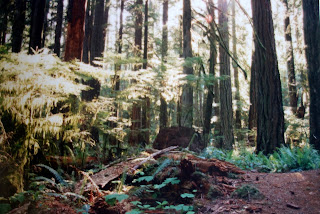 The vegetation of the park was just breathtaking. The light's rays made their way through the trees, which were taller, and bigger than any I had ever seen. The patterns of light and shadow on the huge variety of plants, paths, and the water of Beaver Lake are indescribably beautiful. Everything was in full bloom, and it was fascinating to see the different areas of the park: some were carefully maintained, while in others you felt like in the wild. 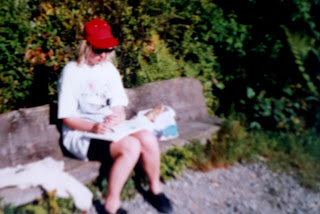 At one visit of the Beaver Lake, I decided to paint. After a period of four years without practicing my skills, I had a hard time capturing the scene. It was frustrating.

We saw lots of squirrels that were so tame that they came up to us and seemed rather confused when I backed away. We also saw raccoons posing for photographers.

When we went to the historic part of the city, we saw the famous Gastown steam clock that blows off steam every 15 minutes while chiming.

All this beauty was, however, still not enough to help me get over my homesickness. I had never been far away from home for a long time, and I missed my family terribly. The nine hour time difference and the difficulty to find a pay phone made it hard to stay in contact. This was a touchy subject between Ingo and I. Ingo was used to being away from his family and had a hard time understanding my feelings. He grew up in a family that had moved often, first within Europe and then finally to Canada. Being away from grandparents and even parents had been a normal part of his life.

I hated the thought of being away from my family and friends, and was afraid that I would become dependent on Ingo if we stayed in Canada. I did not want to end up as a housewife whose life's purpose was cleaning the house and looking after the kids. I was looking for the challenge of a career.

I was sure, I wanted to return to Germany after the half year off. Nevertheless, I encouraged Ingo to apply for jobs. With the perspective of the release of Hong Kong of the control of the British Empire in 1997, Vancouver's industry hoped for a big economic boom. We already noticed that some of the Vancouver areas felt like parts of China where everything was written in Chinese instead of English. This made me feel even more uncomfortable as I had enough problems to get around with my English.

I also had a hard time in the restaurants. I was annoyed that the restaurants did not offer carbonated water, my staple drink during those days. I missed my rolls with delicious cheese. Instead breakfast was usually eggs, bacon, sausage, hash browns and toast which was fine once in awhile but not on a daily basis.

Twenty years later, I have adjusted to the Canadian breakfast. I am still not a fan of hash browns and sausage for breakfast, but bacon and eggs or even better pancakes with apple sauce are a breakfast highlight - but then we only have it once a month or while on vacation at the cottage.

My main beverage of choice is now green tea. When I lived in Germany, I never drank any warm beverages but once I experienced my first Canadian winter, I needed something warm to take away the chill. I have even switched from carbonated to tap water mixed with a little bit of juice, and find carbonated water now too frizzy.

With regard to dinner, we cook a mixture of Italian, Greek, and Asian dishes but hardly any traditional German meals. We are still not big meat eaters, so you won't be served a steak in our house.

Thank you for following my blog. Please forward a link to your friends and family if you think they might be interested in my stories. Thank you in advance for helping me to increase my audience.