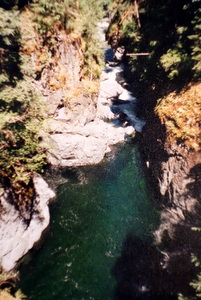 From Port Alberni we continued along the Cameron Lake to Coombs, which looks like a small town from a Western movie. Then we drove further on to Parkville. We decided to take a detour to the Englishman River Falls. We had just started our walk when I remembered that I had left my purse on the backseat. I went back to hide it in the trunk. That is when I saw the two mastiffs running free in the parking lot. If you have followed my blogs, you know that I had a severe dog phobia (as well as other pets) for many years. Therefore, you will not be surprised to learn that I jumped into the driver’s seat of the car and was trapped in the car. Even when another lady asked the owner to put her dogs on a leash, she just called them back. I hoped Ingo would return, and he finally did after what seemed an eternity. While the dogs sniffed at Ingo, he talked to the lady who was totally indifferent. Her two puppies would not harm anyone. I did not really care. I did not even want them to come close to me. 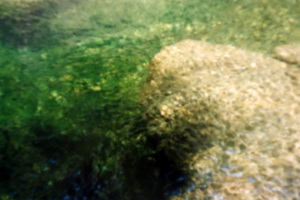 Under Ingo's protection, I finally emerged from the car and we hiked to the two waterfalls. The water in the natural pool beneath the waterfalls was beautifully green. It would have been amazing to swim in it but at this time of the year it was definitely too cold. 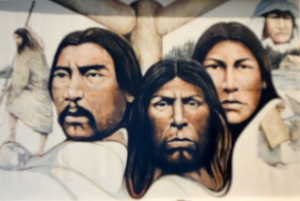 Following along the Strait of Georgia, we passed Nanaimo and reached Chemainus, a picturesque little town with lots of small art and craft shops, cafes, and restaurants. The town is famous for its huge outdoor murals which attract many tourists. I loved this little town. The atmosphere was just enticing. There was so much to see and the smell of delicious food hung in the air. It was too bad that we had already stopped at McDonald's.

Ingo bought two first nation drawings, while I was fascinated by some handmade teddy bears. As a bear collector and maker, this was like being in a candy store. One had eyes with lids that closed when he was lying on his back. Lying down he was humming with satisfaction, his belly moved up and down, and his head moved slightly to the back. When you pressed the little guy into your arms, he chuckled. Adorable! I would have loved to take him with me but I had already bought a bear dressed in Inuit clothes in Edmonton. Unfortunately, I never saw a bear like this again.

On our way to Port Renfrew, we got a first glimpse of Victoria because we took the wrong highway by mistake. The road to Port Renfrew was close to the water. However, the view was mostly blocked by the many trees, mostly deciduous trees.

We had a picnic in River Jordan. The view toward the sea was fantastic, but the fallen temperatures and the strong wind forced us to retreat to the car to finish our meal.

Once we reached China Beach, it got spooky. The fog got thicker and thicker. I almost felt like sitting in a plane flying through a thick sea of clouds. The landscape was somber with lots of huge areas of deforestation. It was disenchanting.

In Port Renfrew, a tiny town with a population of maybe one hundred, we immediately found a bed and breakfast which looked alright at first sight. However, while I was settling down to write my journal, I saw some blood on both the blanket as well as the pillows. Disgusting! We had already been told that the hotel was very run-down. As the fog had just engulfed everything, we did have no other choice but to stay. However, we packed our stuff and moved quietly to another room. In this room, there was only blood on one side of the bed. Ingo assumed the blood did not get removed during the wash or that it was from the cat which was jumping all over the place but I was not convinced. Needless to say, I spent the night in a thick sweater and pants instead of pyjamas.