I am sitting at the cottage, enjoying a wonderful sunny day while I am writing this blog. I enjoy looking back at the great trip my husband and I did right after we moved to Canada. I am glad we went. Once Ingo had a job, we bought a house and soon after adopted a puppy. With the new responsibilities, a trip like this would have been difficult to organize. 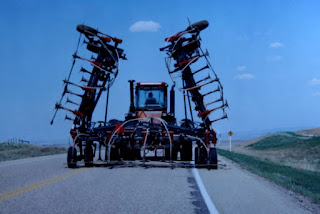 In today’s blog, I am writing about the drive from Vernon to Calgary. At first, the landscape around us was still dominated by meadows and farmland. We passed Mara Lake, another of the magnificent lakes we saw on our trip. It was huge, with a beautiful sand beach and water as smooth as a mirror.

Soon, however, we ended up in a big cloud of dust that made it difficult to see anything around us. Highway 1 was covered with a mix of gravel and sand. For someone who was raised in Germany and was used to the well established autobahn system, seeing what roads Canadians considered a highway was unbelievable. Now, after having lived for more than 20 years in Canada, I can see the damage that is the result of the harsh winter conditions roads. In addition, the dimensions of Canada are just not comparable with the ones of “little” Germany, where the population density is much higher.

A rude awakening awaited us when we were faced with a battlefield caused by human interests. Hundreds of cut down trees created a very somber mood, especially after the picturesque lake scenery. 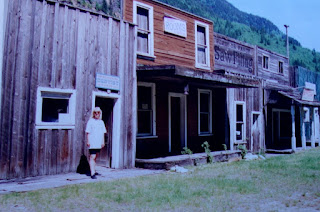 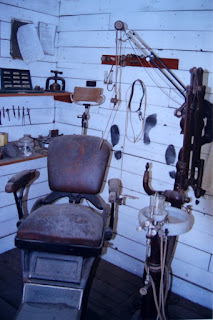 In 3 Valley Gap, we found a ghost town with historic buildings which were moved to the location from various towns in British Columbia. Some of the buildings were already renovated, others were in their original state. Some were still used for big gatherings. I was fascinated by a luxury train with living room, dining room and a couple of sleeping cabins. That is traveling in style!

As the owner of the museum also owned the adjacent hotel, we were taking on a tour through the hotel. The pool area was decorated with a true to scale mural of the Titanic. Ingo was fascinated by the honeymoon suite which was in a cave and had a bathtub carved out of stone and a small waterfall.

We stopped in the Mount Revelstoke National Park for a picnic and some time to sketch. Our trip led us from one park to the next. We had traveled through the Glacier National Park and the Yoko National Park that turns into the Banff National Park at the border of Alberta.

Even though we were in the mountains, it was very warm. I guess it was a different story further up at the peaks of the mountains that were still covered in snow. Banff was a picturesque city with beautiful houses and shops. However, the prices reflected that it was a place for people with money. Nevertheless, there were lots of people strolling around.

I took over the wheel for the next part of our journey as we had a piece of well maintained highway in front of us where the speed limit was 110 km/h. Finally, we could drive at a decent speed. However, I had to admit that most roads were not suitable for the high speed I was used to driving on the German autobahn. The road conditions made it unsafe. As we were on a pleasure trip and wanted to enjoy the drive, we did not have any problems to stay within the speed limits. Another advantage was the lower fuel consumption.

We spent the night in Calgary in an inn. The next morning, we found out that we had missed our luxurious continental breakfast consisting of a doughnut and orange juice or coffee which was only “served” until 9 am. The breakfast we finally had in one of the fast food chains was a far cry from a nice German breakfast with rolls, bread, cheese, cold cuts, and jam. 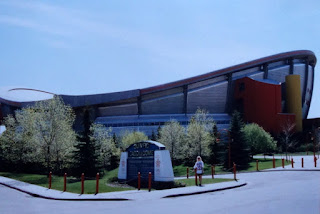 We checked out the Saddledome and the main shopping street. To our surprise, we saw two food vendors selling Bavarian sausages with at least 40 people queuing up to get served.
Perhaps Ingo and I should have opened a German restaurant serving fresh “Äppelwoi” (apple wine) and “Handkäs mit Musik” (see last week's blog). We never went into the restaurant business. It would just not be the right profession for me as I do not like cooking, plus I would not have any time for painting anymore. Nevertheless, whenever my parents come for a visit, they are talking about all of us opening a German restaurant together. It will stay a dream. Even though it would be nice to have all the great German dishes available, I prefer someone else to cook and serve them. Nowadays, my husband Ingo mostly cooks in our house. He serves a variety of different cuisines. German food is only served when my mother comes for a visit and cooks for us. And I certainly make sure every time I visit Germany to eat my favourite dishes.

I hope you liked my travelogue. Please feel free to share my blog with family and friends. To find out what we experienced the next day, please return to my blog next week.