For today's blog, I had to do quite a bit of translation searches because I have always written my journals, which are also the source of this blog, in German. Describing the natural wonders we saw during our stay in Port Renfrew in English made it necessary to get some online help.

Even though we did not take a lot of pictures during our trip, and some of them are of poor quality, these days you can find fantastic photos online. They have not only refreshed my memories, but also made me realize how much easier it has become to take photographs. With digital photographs, you can see right away how your photo turned out, and can pick the best ones for printing, or you can just save and share them electronically. 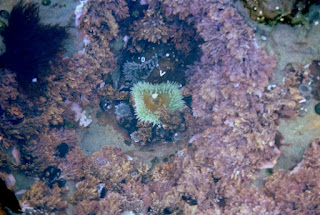 On our day in Port Renfrew, we got up before 7 am to go to the Botanical Beach, where we looked at the many tidal pools which contain habitats for fish, starfish, mussels, purple sea urchins, algae, green anemones, barnacles, and snails. At least, those are only the ones we recognized. I could have watched the pools for a long time but we had to hurry as the flood was coming back in. 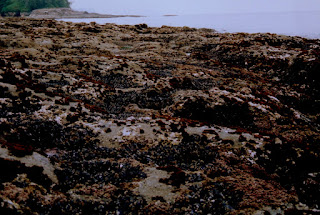 I was very nervous on our way back to the car as we had seen many signs warning of bears and cougars. If it had been up to me, I would have passed on this hike and the chance to see the fantastic wonders of nature. Ingo was not able to convince me that we would be fine if we talked loudly. He explained that the animals just do not like to be surprised by humans. While I love to watch them from the safety of a car, behind a fence or an animal documentary, I was not keen on meeting one up close and personal. I was more than relieved when we were finally back at the parking lot.

We continued our trip in the direction of Victoria. We drove around the Saanich Peninsula but were not intrigued to investigate the area. Instead we returned to downtown Victoria where it was very busy.

We went strolling through the main shopping streets and visited “The Spirit of Christmas”, a multilevel store that offered Christmas articles throughout the year. I could not believe the range of products and the fact that people would want to purchase Christmas gifts year around.

Many of the big tourist attractions and hotels are located close to the harbour, including the Parliament Buildings, the Pacific Undersea Gardens, the Royal British Museum, and the Royal London Wax Museum with Josephine Tussaud's wax figures. 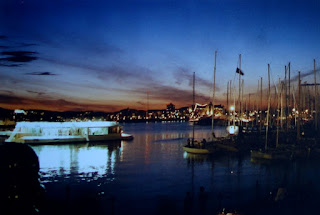 We decided to have dinner in the harbour area. It was not easy to find something for our budget. At the end we decided on a restaurant that was slightly pricier than what we had hoped for but the food was worth it. There, I learned what the term “bottomless glass” means. When Ingo told me I could refill my glass as often as I wanted without having to pay, I would not believe him. Soft drinks were already so much cheaper in Canada than in Germany. I thought he was pulling my leg. I was only convinced when I saw the bill.

Trying to find a supermarket to buy food for the next day, we reached an area with one huge mansion after the other. I had seen some of the big houses in the Mississauga area but they paled in comparison. I still do not know how people can afford such luxury, and why they would want to live in such a big palace. I would prefer to travel and paint instead of putting so much money in a property.

We finally ended up in a huge grocery store where a lot of products were sold in bulk according to one's needs. What a great concept! Until now, I still have not seen something similar in Germany.

While we were in Vancouver, we even found a store where the bottles would be washed by a machine and then refilled with the desired drinks. I have to admit that I never saw this system anywhere else. Sadly, I suppose it was not profitable enough. 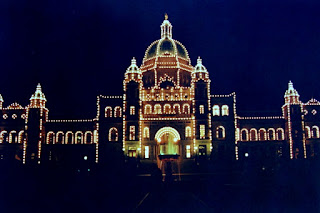 After dinner, we took some night photos of the lighted Parliament Buildings. The lights from the ships and the busyness in the streets with pedestrians, musicians, horse-drawn carriages and rickshaws created a wonderful mood.

The next morning, we started our return trip when we boarded the ferry to Vancouver. To join me on my look back to our adventures please return to this blog next week.