After our visit to Ottawa in early July 1995, we went back to the cottage in Muskoka to enjoy some lazy summer days. When we reached the cottage, we were greeted with a not so pleasant surprise. The floor of the living room was trembling, and a horrible booming noise could be heard in the whole cottage until Ingo turned off the water pump. However, that meant no water. Luckily, early the next morning the handyman came and fixed the problem.

On this second visit to the cottage, the weather was fantastic. It was very hot. We enjoyed the time on the patio and swimming in the lake. It was the middle of the week, and I could hardly believe our luck of being able to enjoy life with crafts, books, and games while everyone else was at work. Actually not everyone, as we would find out when we went to the “33rd Muskoka Arts & Crafts Summer Show” that started on a Friday at 10 am. It was about half an hour later when we reached Bracebridge, and it was hard to find a parking spot. I had wondered who would visit such an event on a Friday morning, and was totally surprised to see so many people.

There were 204 booths. You could buy anything from clothes, jewelry, pottery, paintings, wood works, sculptures, glass pieces, and even boats. Unfortunately, nobody sold teddy bears, so I could not compare my furry friends to others. It was wonderful to see all the goods in this beautiful setting, among huge trees that provided shade in this heat. We were very thankful for the cooling relief these trees brought in this boiling heat.

We continued to the old core of the town, and I was enchanted by the old buildings. However, I found it rather strange that all stores were decorated for the Christmas season. Ingo told me that this was not unusual: many stores offered Christmas items in July as promotions. I had already noticed that every town seemed to have a shop that sold Christmas decorations throughout the year. Weird! How can you think about Christmas in the middle of summer?

However, I was intrigued, and wanted to see what Santa's Village was all about. I expected an idyllic Christmas town, and was understandably disappointed when I found out that it was just an amusement park. We did not visit it, but returned to the cottage. We did not go swimming again as the water of the lake, which is created due to a dam, was very low and dirty. The many motorboats had churned up the sand of the lake and left oil traces on the water surface and the sand. As much as motorboats look like fun for water skiers, they also are a big noise and water pollutant. 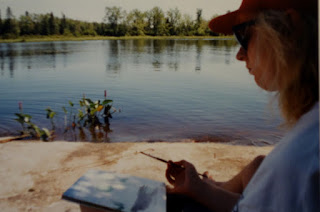 At night, we enjoyed being able to prepare a nice dinner by ourselves. Ingo made the main course and I the dessert. At twilight, I finally started a painting, sitting on the dock. The fast approaching darkness prevented me from finishing my piece, but I was quite happy with the beginnings, especially the water. I am pretty sure that I would think differently if I looked at the painting right now, even though I like to look at my older artworks, especially when I am struggling with a current one. They show me that I have indeed come a far way. I just wish I could find those pieces from that time. I usually hang on to more than I should keep, but I have not been able to find much from the early days in Canada. Maybe, I considered them not worth saving once I had done my first courses with the Ottawa School of Art.


At night, a severe thunderstorm awakened us. The lightning was so strong that everything was as bright as day, however the light was surreal white. The storm howled, and in no time the windows were totally fogged up due to the big difference in temperature outside and inside. I had never experienced such a spectacle. Next, we lost power, another first for me.

When we woke up in the morning, the power was still gone, and even the phone was dead.
Ingo had never experienced the lack of phone service. All around the cottage there were lots of broken branches, but all the trees were still standing. Luckily, the cottage and our car were undamaged.

We decided to pack our stuff together with the help of a flashlight, and head home early. On our way back to Mississauga, we heard the first reports of the major storm. A tornado had even hit Orillia where it cleared the roofs of several houses and damaged cars. Trees were blocking roads everywhere. The whole Muskoka region was without power, some areas even for a couple of days. We were certainly happy to have come out of the storm without harm.

When we reached Mississauga, the weather was fantastic. The sun was shining brightly. It was not before the evening that a rather small storm reached the Greater Toronto Area. At the time, we were just biking along the Waterfront Trail towards Oakville, where we saw some of the biggest mansions I had ever seen. Each one looked like a palace. I could not believe the number of very rich people in Canada. In Germany, hardly anyone could afford living like this. Nowadays, I know some of the reasons, like the lack of space and the difference in construction materials and regulations. However, this is another topic in itself.

Thank you for following my journey of discovering Canada. I hope you will continue to follow my blog. If you know anyone who might be interested in my story, I would appreciate it if you would share my blog. Thank you in advance for helping me to increase my audience.