Exploring the Culture of Southwest Ontario

When we first came to Canada, we lived with Ingo's parents which was not always easy after we had been used to living on our own for years. I am sure it was not easy for them either to have constant “visitors” at their house. As they were so very generous and did not want to accept any rent or money for food, Ingo and I had decided to invite them to “The Merry Wives of Windsor” at the Stratford Festival. For me, it was a chance to see some of the cultural events of Ontario.

We stayed in a cozy, beautifully renovated B&B. When we strolled through Stratford, I liked the little shops, but I was annoyed that a main artery road went through the town which meant that trucks were constantly passing by. Therefore, I did not really enjoy the meal on an outdoor patio. The path along the river Avon towards the festival site was very different. The area was just beautiful with lots of green from the parks, beautiful swans and ducks in the water, and small wooden bridges crossing from one side to the other. A place just perfect for painting! 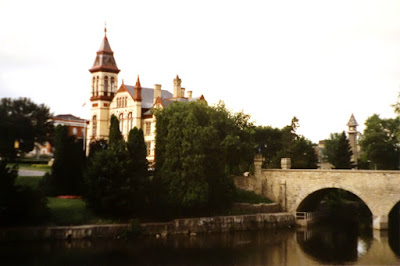 I would have liked to stroll this path again the next morning but we had registered for a walking tour which turned out to be totally boring as the guide spoke so quietly and monotonously that I gave up listening after a short time. He also walked so slowly that a snail could have easily passed him. It was exhausting!

The play was very good, even though I had a hard time following the plot because the actors spoke Old English, but the choreography was fantastic. I would have loved to watch Macbeth which would have been easier for me as I had studied the story in Old English at school. Hopefully another time I’ll be able to see it. 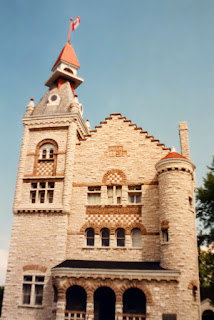 We continued from Stratford to St. Marys, also called “The Stone Town” due to the many stone buildings build from the abundant limestone of the surrounding area. Strolling through town, I found a great arts and craft store that sold lots of materials for teddy bear making. There was also a flyer for the upcoming teddy bear parade. I was in bear heaven! I would have liked to return for the parade. I have never managed.

Next, we reached Grand Bend, a vacation destination right at the shores of Lake Huron. I felt like in a Spanish tourist site. There were women with the tiniest bikinis walking even down the shopping promenade, Arnold Schwarzenegger type guys with heavy gold chains on the hairy chest, lots of variety stores offering cheap merchandise, and bistros with loud music.

The beach and the water were indeed beautiful, but it was very busy, even on a weekday. I still would have liked to walk along the beach, but this did not fit into our sightseeing programme.

Instead we continued to Goderich. The town was a picture of devastation. It was a sad sight: there were uprooted trees everywhere, especially old trees with a diameter of at least 2 metres. Fortunately, most of the houses were hardly damaged. You could see where the tornado had cut its path from the water through the town. The beauty of the beach was a stark contrast. It was so inviting to go swimming but unfortunately, we did not bring our swimming wear.

Rather, we strolled to the town centre that has an octagonal square where the courthouse is situated. All around were some nice shops. In one shop, the salesman wanted to sell me a designer bear for $200. In another store, it would have been a fantastic opportunity to increase my collection with a “Vanderbear” that was reduced by almost $100. However, without a salary and a space to put my bears, I had to pass.

Finally, we drove to St. Jacobs, a picturesque town with many artisans and the famous St. Jacobs Farmers' Market. We did not have a chance to visit the town as it was already dinner time.It was a shame because I also would have like to learn more about the Mennonite history of the town. Instead, we decided to end our little trip with a dinner at a local restaurant. Inside the restaurant, we bumped into a couple of Ingo's father's colleagues. Ingo's dad reminds me of my own father who seems to know people everywhere.

I enjoyed spending time with Ingo's parents. Even though we lived under one roof, his father was often away on business or rowing trips, and his mother was usually busying herself around the house.

It was also a nice distraction because Ingo had received notice that the company in Ottawa was just checking the references before they would make him an offer. The call left me very unsettled and caused a whirlwind of thoughts and emotions.

Thank you for following my journey of discovering Canada. Maybe, my story has given you some ideas for beautiful Canadian areas that are worth visiting. I hope you will continue to follow my blog. If you know anyone who might be interested in my story, I would appreciate it if you would share my blog. Thank you in advance for helping me to increase my audience.