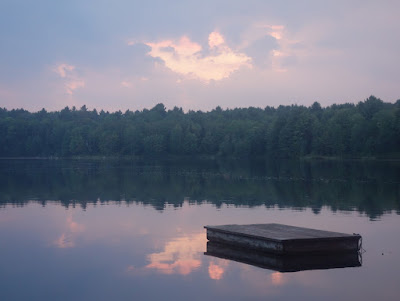 
At the beginning of July 1995, I was finally introduced to the cottage country. However, the day of our trip was not one of my best days. Ingo and I had a couple of fights – living with Ingo's family without a place to retreat, and the increasing pressure of not finding a job made us more and more irritable. I felt trapped. There was nobody but Ingo around with whom I could have talked. I was ready to take the next flight and leave for Germany.

At the end, we decided that a couple of days at the Peters Cottage would be good for us. On the way, we stopped at the famous “Webers” restaurant where people are lining up for the burgers, especially on the weekends. The restaurant was so successful that they built a footbridge over the highway to make it possible for people coming from the opposite direction to access the restaurant. I was not too impressed with the burgers, but I guess the restaurant is such an institution that the quality of the food does not matter anymore.

When we reached the cottage, it was about 10:30 pm. Everything was pitch black, and the pouring rain did not make it very inviting. Even though Ingo turned on the light at the cottage, I did not see very much. We had to go down a steep set of stairs. I was packed with all kinds of stuff, including a glass bottle of water, a beauty case, a craft bag, and a teddy bear, and cursed for stepping into a puddle, when I suddenly slipped and slide down on my back and arms. My cry did probably scare away all wildlife in the area. Ingo came running. Fortunately, I had dropped everything and avoided even more injuries. Plus, nothing got damaged, not even the brand new pants I was wearing. Ingo treated me with ice packages while he tried to console me. Once the shock wore off, the pain increased even more. Ingo tried his best to distract me with old comics and a game of “Mensch ärgere dich nicht”, a German board game similar to Trouble”. It could all have been worse. I could have broken some bones, but for the next couple of weeks, I was in so much pain that I could neither walk nor sit or sleep properly.

Despite the wet and cold weather, we went to Bracebridge to visit the flea market, then the “Arts and Craft Show” where local painters and sculptors showed their creations. I was inspired to pick up my brushes again. There was lots to paint, if the weather had improved.

Instead, we visited the “16th Antique and Classic Boat Show” in Gravenhurst, where we saw everything from luxury yacht made out of mahogany to racing boats. According to what I heard from Ingo about the people owning cottages in the Muskoka region, I was not surprised to see such luxury.

I was not able to see much of these monster cottages, but I would get another chance during one of our next trips to the cottage. However, before I was able to see more of Muskoka, Ingo's job search brought us to Ottawa where he had his first interesting job interview.

Thank you for following my journey. While I will relax for at the cottage this week, my blog for next week is already scheduled. I hope you will return to read about my first discoveries in Ottawa.
Posted by Kerstin Peters at 14:30