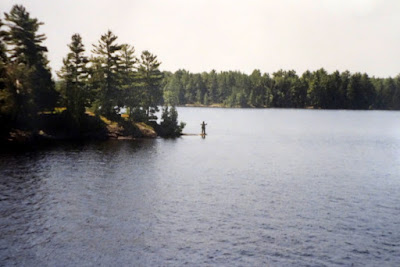 It was time to make the important decision about where we wanted to continue our life. I had done a lot of brooding over the question of whether to stay in Canada, or to return to Germany. I was torn and felt overwhelmed. When Ingo finally got the offer, he asked me for my decision. I told him about about my struggles.

At first, he was pulling away and went for a lonely trip in the canoe. I was shocked about his reaction. I thought we would sit together to talk about our doubts and make the decision together. I assumed that he had already figured out by our several discussions that I was not too thrilled about the idea of staying in Canada.

While he was gone, I threw myself into washing the dishes. When I suddenly saw the beautiful sunset, I dropped the dish cloth, grabbed my painting equipment and hurried to the deck to capture the sunset. I was quite happy with the result which just shows that painting is a great stress reliever.

When Ingo returned, he wanted to discuss the move to Ottawa, but I put him off because I was afraid that the discussion would get me so upset that I would brood over all the challenges throughout the night. Instead we played a round of “Mensch ärgere Dich nicht“ (a German board game similar to “Sorry”) which Ingo won as always. 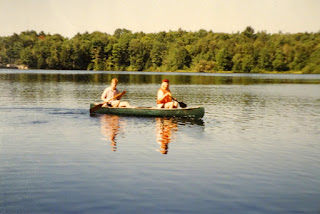 The next morning, we were up early, as we had heard that power would be cut for a couple of hours. We continued to avoid the necessary discussion. Instead, we went canoeing on the Muskoka river, followed by a drive on the “Lady Muskoka”, a passenger boat that takes tourists along the Muskoka river and lake. When we passed the “millionaires row”, I could hardly keep my eyes from bulging. Most of the cottages at Lake Muskoka were quite a good size but those millionaires' cottages looked like palaces. Even more important than the actual size of the building were the number of boat houses a family owned. Some families owned their own islands including a guest house and a house for the housekeeper. This house alone was often at least twice as big as the cottage of Ingo's parents. I was hard to comprehend all this wealth.

It goes without saying that we passed Santa's Village, which is indeed only an amusement park for small kids. We not only saw one of Santa's Village boats with Christmas songs blasting from the sound system, but also Santa with his long white beard. However, instead of his red robe, he wore a black swim trunk and dark sunglasses when he passed us in a motor boat.

In the afternoon, we were lounging on the cottage's patio. What a luxury! I appreciated our time off. How many people could have afforded such a long vacation?

While all this helped to distract us from the important decision we had to make, and I even managed to postpone our discussion for another day. We still could not avoid talking about the big challenge in front of us. It was time to take a clear step, and get out of the doubtfulness.

You are probably wondering why I always get away from the topic of our decision of whether Ingo should accept or reject the job offer in Ottawa. I was thinking about just writing the blog with the facts of how we finally came to a decision, but decided to write it in chronological order instead to show how reluctant we both were to commit. I hope you will return next week to find out how we finally made up our minds.