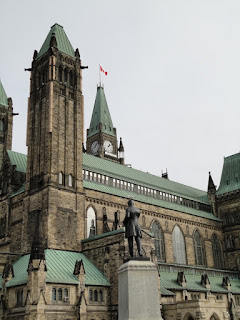 
After Ingo and I had avoid a decision about whether or not Ingo should accept the job offer in Ottawa for the longest time, we decided to give it a try for half a year. We were sure that we would be able to find out within six months if we liked living in Ottawa, whether Ingo like the work and the company. and whether I would get bored staying at home.

However, this decision only solved part of our problem. The part that had not really been a problem. We had never doubted that Ingo would be able to find work. His acceptance of the position in Ottawa meant that we finally had money coming in to enable us to find our own apartment. This was a major step to getting back our independence. As our belongings were still stored in Germany, we were looking for a furnished apartment in Ottawa. We were happy to finally have a place for ourselves again. I was even looking forward to cooking, which is not one of my favourite pastimes.

We left for Ottawa on August 4, the Friday before the long weekend. In retrospect, I have no idea why we picked that day of all days to travel. It took us more than two hours to get just out of Toronto. When we decided to leave the 401 for the highway 7, we were delayed due to a bad accident ahead of us. As we were so far behind our schedule, we decide to give the guest house we had booked a call to inform them of our delay. It turned out that they could not find the reservation. They told us they did not have a double room for the night and gave us a higher weekly rate than we had booked. In an age where cell phones were not affordable for the public, we did not have any opportunities to find another accommodation.

Therefore, we decided to go to the guest house and discuss matters on site. We were certainly in for a surprise: the two men at the reception were not apologetic at all about the mistake. They did not care. One of the men first offered us a double room in another hotel, then withdrew the offer. Suddenly, one of the double rooms became available because two young men had decided just at that moment that they did not want to stay overnight after all. I found that very suspicious. Ingo asked them whether the room would be cleaned for us and would have its own bathroom. They assured us that that would not be a problem at all. I am almost sure that did not even know what we were asking them as their English was very poor.

The room they showed us looked like a sleazy room of a junkie. There was only one bathroom in the whole building, and part of the railing in the staircase was missing. I would have slept in the car before staying in that dump. Even Ingo was shocked. We were in a real jam. It was past 9 pm on the Friday of the long weekend in August, and after a seven hour drive were beyond tired. Luckily, someone gave us the name of the Algonquin Hotel Apartments, where we rented a one bedroom apartment. We were very happy. The apartment was very simply furnished, but it was situated minutes from Parliament Hill and Ingo' s new work.

The first day at our new location, it was raining non-stop. We did not mind as we were looking at houses to see what was on the market in the area. The first house had purple carpets and was smelling strongly of smoke; the second one was beautiful, but right next to a main street that was just in the process of widening to four lanes. We knew that we would not buy a house in the next couple of months, but you see how fast things started to move. Suddenly, we took action and were not the couple anymore who just waited to see how things were going, reluctant to commit.

This was, however, where the second part of our problem, the real problem, needed to be addressed. I was still in Canada as a visitor which meant that I was only allowed to stay in the country for six months, namely the end of October. There were means to get around this, for example by leaving the country and reentering, but that was definitely not a long-term solution.

Can you guess what was our conclusion? Not very romantic and certainly not an idea I could have warmed up to just a couple of weeks earlier. However, suddenly I got all excited about the prospect of getting married. This would help to facilitate my application as a landed immigrant, a status that would not only allow me to stay in Canada but give me work permission.

I was also very excited about the prospect of a reunion with my parents and sister. Even though we had already decided on the date for the wedding, which would be during my sister's fall vacation, I wanted to inform my family and friends not before Ingo had officially proposed. We would have a civil wedding in Canada, and then the big white wedding the following year in Germany with all our family and friends.

I did not have to wait long to make the announcement. Ingo asked me the following evening while we were out roller skating at the Belvédère Rockcliffe Lookout during a beautiful sunset. There were many people around us so I hurried to accept because Ingo jokingly threatened that he would ask me loudly in front of all those people. I would have to wait three days before I was able to reach my family with the happy news. In the present age of cellphones and social media, this seems just incomprehensible. Spreading information – both good and bad – has certainly became a lot easier in the last 20 years.

If you would like to find out how things continued for us in Canada's capital, please return to my blog next week. Thank you for following my adventures. I appreciate the wonderful feedback I got so far. If you know anyone who would be interested in my story, please forward my blog. Thank you in advance.