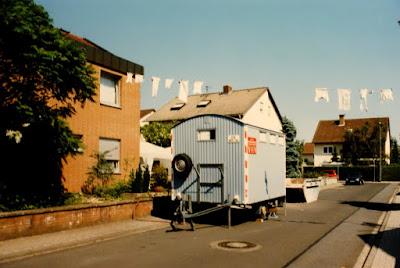 When I arrived in Germany, three weeks before the wedding, I immediately started to tackle the tasks that still had to be dealt with. On the day of my arrival, I ordered the flowers and the four-tier wedding cake. It was no problem at all. This was very different from my Canadian experience. When my future mother-in-law and I went to a florist about six weeks before our Canadian wedding to order a wedding bouquet and one bouquet for the table in the restaurant, the florist was stunned that I had not dealt with this task at least six months before the date. I guess she would have been shocked, if she had known that we had only decided to get married two months before the wedding date.

I also found someone who would iron my wedding dress for the big day. Despite the fact that it was hanging in a special place in the plane, it still needed some smoothing out. 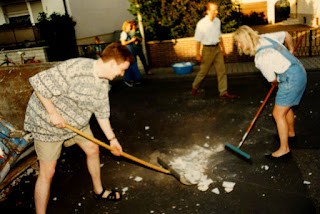 Next was the organization of the “Polterabend”. The Polterabend normally takes place in front of the house of the bride's parents. While the couple announces the occasion, invitations are not sent out. The guests usually do not only include the guests of the wedding party, but instead it is open to the bigger circle of friends, neighbours, and colleagues.

Guests bring and break porcelain to bring luck to the marriage according to the saying “Scherben bringen Glück“ (Shards bring luck). The couple cleans up the pile of shards together as a preparation for their married life when they have to be a team not only in happy times but also work together through difficult situations. Drinks and food are offered, and the celebration often takes place under a tent in a relaxed atmosphere. My parents and I decided to empty the garage and then have the “Polterabend” in the driveway in front of the house. My dad ordered the waste container which we needed for all the porcelain.

A total surprise to me, one which I did not learn until the day of our “Polterabend”, was the tradition of hanging a clothes line in front of the house with babies clothes (in our case my own) to ensure quick child blessings. To make the expectations even clearer to us, my parents set up a “Klapperstorch” (a stork that is supposed to bring the babies) carrying a pink bundle of joy. It worked indeed in our case: less than a year later, the stork dropped off a blue bundle at our door, a bouncing baby boy.

My maid of honour came over to look at my wedding dress to see whether the dress she had seen would fit with my dress. In Germany, you only have a maid of honour, a best man and maybe some flower girls. The concept of Bridesmaids is not known in Germany. The maid of honour and the best man pick their own outfit. It was an especially thoughtful gesture that my friend wanted to pick a dress that would look good with my wedding dress.

To get my health insurance issues solved, I also started working at my father’s architecture company. As an employee, I had access to health insurance. I checked tenders, and final invoices.

Despite all I had to do, I felt out of place. I stayed with my parents in their guest room. It was just the same as when I lived with my future in-laws, there was no place where I could retreat. While the house had once been my home, it did not feel like home anymore. My first apartment was transformed into office space.

Then, there was all the stress with my latest apartment, which had its own garden. My tenants had given notice and had not cared for the garden at all during their year-long stay. The garden looked neglected and needed some work before we could rent out the place again. As Ingo and I did not have time to do the garden work, we had to get a gardener which meant unexpected expenses.

As if all this was not stressful enough, my grandmother had to be transported with an emergency doctor in an ambulance to the hospital after her legs were swollen like those of an elephant. She had a blood clot. However, the doctors were optimistic that she would be released within a week.

There was another disaster on the horizon: Jessie had been run over by a car in front of our house the day before, and she was also in the hospital with injuries to her head. Ingo did not even want to tell me about the incident, but it slipped out of his mouth because he was so upset that he had not paid better attention. He was also traumatized because of the drive to the hospital and Jessie's desperate crying when he had to leave her at the hospital. I am just glad I was not there when the accident happened. I would probably been all hysteric. At least Ingo stayed calm on the outside. Jessie bled heavily so that our neighbours and Ingo wrapped her in bedding and raced her to the closest hospital. On the way, she continued to close her eyes. However, she was lucky. She lost a lot of blood, but her gums could be stitched together; her brain wave measurements and the x-rays were normal, so Ingo could pick her up after a day. This was all happening very close to Ingo's own departure two days later. Luckily, Jessie was in good hands with our realtor who had become our friend. However, she was still shaky on her feet and could not lie down by herself when Ingo had to leave her behind which was very hard for him.

Once I know that both my grandmother and puppy would be all right, I could finally enjoy some time with my friends. It felt so good to spent time chatting, to be updated on their lives, finally to feel among friends again who know me and with whom I can talk freely in my mother tongue without limitations.

Thank you for following my story. I hope you will return to my blog next Friday to read all about the big day.