The Out of Country Wedding Planner 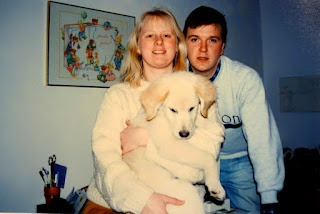 When Ingo and I got married in a civil wedding in October 1995, we had already decided that we would have a church wedding with all our relatives and friends in Germany in the spring of 1996.

Planning the wedding from abroad was not that easy because I had to do everything by myself as the coordination with my sister and friends was too difficult. Luckily, my parents undertook the task of finding the reception venue.

However, there were some issues that were not directly related to the wedding that had to be addressed. First, there was the problem of getting health insurance for myself. As I was still only a visitor in Canada, we had to buy travel insurance for myself so that I was at least covered for the basic emergencies during my stay in Canada. The big problem was, however, insurance for my visit to Germany. As I was officially still registered in Germany, I would have been insured under my husband's insurance policy as a stay-at-home wife. However, as my husband was living and employed abroad, in a country where I did not have a residence permit, so I was not insured at all, and could not even buy private insurance. Therefore, we hoped that I would get my landed immigrant status before the trip. At the end of February, however, my file still did not even have a number. It did not look like my file would be processed soon.

It was not until the end of March 1996 that I received a letter informing me of the date of my medical examination which was part of my process to become a landed immigrant. I worried that the doctor would find anything that would prevent me from being accepted. I had to go through a thorough medical examination including blood and urine tests and x-rays. However, during the examination in the middle of April, the doctor and the nurses were all very nice so that I felt less anxious. Everything went fine, and the next step in becoming a landed immigrant was reached.

My trip to Germany was booked for May 16, 1996, two weeks before Ingo's departure. While my earlier departure was fine because I still had lots of errands to run to pull it all together, I was quite dissatisfied with our return flight arrangements. It looked like I would not only travel alone, but I would also fly back to Canada two days before Ingo and his family. This would have been horrible, having to leave behind my family and friends, and then not even being welcomed by a familiar face.

I had hoped for a romantic wedding, but we would not have a honeymoon or at least a romantic wedding night in a nice hotel room. Instead, I would have to travel back alone to our new house in a foreign country that still did not feel like my home.

At the end, Ingo and I were able to fly back together because Air Canada and Lufthansa made it possible when we explained the situation to them that I could switch my ticket with my brother-in-law’s ticket.

As if planning a wedding from out of the country was not already difficult enough, there were the worries for my grandmother who had been sick for a while but did not want to bother anyone. She waited a week to tell my sister who lived in the same apartment building. The doctor diagnosed an acute kidney infection. Luckily, my mother insisted on her hospitalization. While my grandmother was transported to the hospital she had a heart attack. She was taken to ICU. After two operations and a pulmonary embolism, she was finally not in critical condition anymore, but it was still not clear whether she would be able to continue living by herself. I found out about all of this almost a month after my grandmother was hospitalized through a slip of the tongue by my sister.

At the same time, my mother had further problems with her eyes, however, continued to postpone a visit to a specialist.

Then, there was sudden a break in all these gloomy clouds. My sister surprised me with her announcement that she had booked a flight to Canada. She would visit us in less than four weeks. 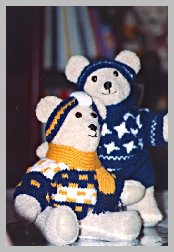 I had also managed to sell my first teddy bear. My first earning in almost a year. Another sale happened not even two weeks later. I was very excited. Things seemed to be turning around. 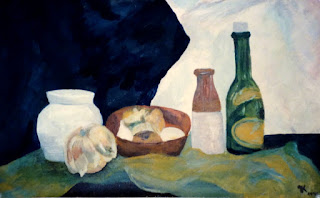 Moreover, I also submitted two paintings for the Ottawa School of Arts exhibition. After quite the struggle with one of the paintings which I covered completely three times before I was happy with the result, I felt proud of myself.

When we went to the Ottawa School of Arts open house, Ingo and I were in awe of the fantastic artworks. Some of the sculptures and paintings were so amazing that we would have liked to own them. Suddenly, I did not feel my paintings were that good anymore and wished that I could paint like some of the others. Then, I reminded myself that some of the artists were full-time students while others like myself were just hobbyists. I could definitely see the improvements resulting from my regular painting practices. However, above all I just had so much fun painting.

To read more about my wedding planning challenges, please return next Friday, December 9, to read about the final weeks before the wedding.