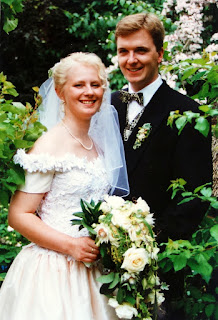 In today’s blog we are finally reaching the wedding week. We started the celebration with the “Polterabend” on June 5. We still had lots of last minute errands to run. My grandmother needed a ride home from the hospital; I had some runs to the registry office to get a new copy of my birth certificate; we had to get the last groceries, drop the veil off at the florist's, and I also had a dentist appointment. As I was still a tourist in Canada with only emergency health care, this was my chance to get my checkup done. My brother-in-law and sister-in-law arrived in the afternoon by train, and they had to be picked up at different train stations. 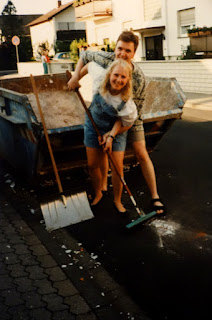 However, the weather was fantastic with temperatures above 30 degrees. I was nervous to see who would come, and I hoped to see some of my school friends as well as former colleagues. People started to show up slowly, so that my mother was already worried that we would have much too much food, but in the end more than 100 people came to celebrate with us, some of whom I had not seen in years. We had a fantastic evening.

As Ingo’s and my family did not know each other, we had a relaxed get-together the evening before our wedding in my parents’ garden. A meeting between the two families is often not arranged before the actual wedding. I guess there was no necessity for it as even up to the generation of my grandparents many people stayed in their community so that everyone knew each other.

While I heard that it is customary in Canada to hold a wedding rehearsal and a rehearsal dinner the night before the wedding ceremony, this is a concept that is totally unknown in Germany. All Ingo and I had to do before the wedding was to talk with the pastor I had picked. It was the pastor who led our congregation during my confirmation years. When we got married, he was already retired but agreed to hold the service. He did not know Ingo. Therefore, our meeting was to get to know Ingo, and to go through the course of the ceremony. Neither Ingo nor anyone beside my immediate family had been inside the church before our wedding. 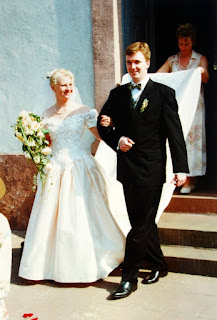 Our wedding day, June 8, was a beautiful summer day with temperatures above 30 degrees Celsius.
We had decided to have the wedding photos taken before the church ceremony. However, we never thought about the fact that Ingo’s parents and siblings would meet us only at the church. Therefore, all the official wedding photos are only with our witnesses as well as my parents, sister, and grandmother. We have wonderful photos from the reception but not one single shot that shows us with Ingo’s parents, his siblings, and grandmothers.

It was so hot that we were already sweating during the photo shoot. Luckily, one of my father’s clients, the owner of a car dealership, had offered us one of his cabrios for the wedding. Therefore, the ride to the church and later to the hotel were quite pleasant. The old church building was also quite comfortable. The pastor even invited the two accompanying dogs into the church.

During the church ceremony both the German pastor as well as the pastor from the congregation in Mississauga took turns, which was very festive. However, I was too excited and nervous to follow the service.

When we left the church, we stepped directly into the “Brunnenfest”, a festival around the old fountain that was situated next to the church in front of the historic city hall building. The mayor served everyone beer, and water for the two dogs. When Lisa, my aunt’s Golden Retriever, left the church, she even gave a paw to the pastor. Too bad nobody captured that moment.

We were all so hot and looking forward to the air-conditioned hotel. Unfortunately, even though it was a newer hotel, it did not have air-conditioning. What was even worse was that Ingo and I were sitting with our backs in the full sunlight. After dinner, we went to the big courtyard where a band provided the entertainment for the evening. I was a little disappointed that I had not considered the practicability of my dress for dancing. It was almost impossible, so I limited my dancing to the bridal waltz, a dance with both my father, father-in-law, and the final dance of the evening with Ingo.

A slight letdown was the four-tier wedding cake. It tasted fantastic, but the Marzipan bears that were supposed to top the upper cake looked like pigs. Luckily, pigs are considered a symbol for good luck, and you can never have enough of it. To this day, Marzipan pigs are popular sweets as a gift on New Year’s Eve in Germany.

As a special treat, the hotel had given us a suit for the night. However, we were in for a surprise when we entered the room. Our siblings and witnesses had redecorated the room. The whole bathroom was filled to the ceiling with balloons. Once we had moved them out of the way, we had to find out that the toilet was covered with liquid soap. Very slippery! The light bulbs of the lamps near the bed had been replaced with oranges, and behind the curtains an alarm clock in the shape of a rooster was supposed to wake us, but it already went off before we even reached the room. However, they had made sure that we would receive a wakeup call at 6 and 9am. We were too happy to care.

At the end of today’s blog, I would like to thank you for your continuous interest and feedback. I hope you can leave all your cares and worries behind for a couple of days to enjoy the holidays with family and friends. Merry Christmas to all of you who celebrate the birth of Christ.

Next week, I will write one more time about my last couple of weeks before I became a permanent resident of Canada. I hope you will continue to follow my blog.