Thank you for following my immigration journey. I enjoyed reading your comments on my Facebook page. While I am going through my journals to write my blogs, I have realized how important art has been in my life. Creating art has always helped me to find a place of peace and joy.


This week, I continue my story with our move to Ottawa. I visited Ottawa for the first time when Ingo had an interview in the middle of July 1995. I liked the smaller city with a European flair, and I could imagine living in this beautiful city. While Ingo had his interview, I visited the National Gallery of Canada. I was in awe of the old masters from the Queen's collection. I also loved the paintings of the Canadian landscape in the Canadian collection.


Until the interview, staying in Canada had only been a farfetched idea, a dream other people had. Suddenly, this option became a possibility. This realization threw me into a state of panic. I realized that I might be permanently separated from my family and friends. On the other hand, I was also fascinated by the extraordinary experiences ahead of me. How many people have the opportunity to pack up their belongings to start a brand-new life on a new continent? I was fascinated by the prospect of finally having time to pursue my hobbies, which I had neglected for years due to working long hours and studying at the same time. The prospect of not having to work for a while was very enticing. In retrospect, it was a very naive view as it made me financially dependent on Ingo. 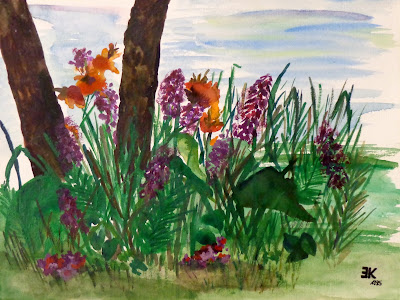 While we were waiting for news from Ottawa, I spend more time painting. In the beginning, I was very frustrated, because I was lacking practice. However, the more I painted, the more confidence I felt. Painting became my refuge. Even when it was time to decide our future in Canada, I retreated to painting. As we were at the cottage at the time, I went down to the deck to paint the sunset. Painting gave me a way to express myself were words failed. I was able to calm down and clear my mind.


I managed to avoid the talk about our future in Canada for three days. In the end, I encouraged Ingo to accept the job offer. I still felt guilty about the decision as I was wondering how I could do this to my parents. They had hoped that we would return after six months abroad. I wished that I could at least call them. It had been three weeks since our last call and I truly wanted to discuss this big milestone with them. They were more supportive than I had hoped by encouraging us to stay where Ingo had the best job possibilities.


Five days after Ingo accepted the position, we arrived in Ottawa. While Ingo and I had talked about not being ready to get married days before Ingo accepted the position, we changed our minds ten days later as is became clear that this would be the easiest way to get me approved as a landed immigrant. At this point, I was still a regular tourist who needed to leave the country at least every six months. I had neither a residence nor a work permit.


This decision meant that on Thanksgiving weekend we were looking forward to a big reunion with my parents and sister. I will start my next blog with this big event in my life. Thank you for reading my story. Please let me know if you have a hobby that you retreat to when life gets out of balance. What do you like to do to calm down and find joy?