The year 1996 ended on a high note for me. After weeks of feeling discouraged about my teddy bear business, I finally experienced my first success. Ingo had taken some of my teddy bears to work as one of his colleagues had seen them and wanted to buy some more. It turned out he sold five of the bears. I was not the only one celebrating. Ingo was so excited that he offered to create a website for me. What a prospect for the new year!


When the day of our trip to Germany arrived, I was very emotional about having to leave Jessie in a kennel. She was not only my first pet, but she was also my confidant, my English practice partner, my cuddly buddy. She helped me immensely through my lonely days. It was the first sign of what would be my reality for the future: No matter where I stay, I am always missing people and pets in my life. A friend once told me that he divided between his country of birth and his new home country. It was only a first glimpse of his reality that was slowly becoming mine, too.


Once in Germany, it was time for our big revelation. We gave the letter of resignation to my father that we had set up as he wanted to retire when the first grandchild arrived. He read it aloud and caused quite the excitement. My parents and sister could not believe that we had kept the news from them for such a long time.


We enjoyed the time with my parents, sister, and grandmother. We also visited Ingo grandmother, aunts and uncles who excepted me immediately as part of their family. I felt close to Ingo’s Omi as she reminded me of my Oma, my mother’s mother. She and I had a very close relationship. I still miss her interest in my life and her openness to the world in general.


I was excited to see my friends, especially my friend Claudia, who was also pregnant. I was a little envious because she had already a couple of ultrasound images of her baby. We still had to wait until January for an ultrasound and had not even heard our baby’s heartbeat. The gynaecologists were on strike, and our family doctor did not have the right equipment.


We had the rare chance to celebrate the 75th birthday of one of my uncles with a big party. Since my move to Canada, I missed most of the important events that brought my social circles together: weddings, special birthdays and funerals. I became an outsider. My husband and my children cannot understand the feeling because they hardly know my family and friends, except for their close relationship with my parents.


When we came back to Canada two weeks later, the only silver lining was the reunion with our beloved Golden, Jessie. She had made friends at the kennel and was not at all heartbroken when we picked her up, even though she was excited to see us. Once at home, she wanted to be part of every activity. She wanted to cuddle all the time, even when I tried to exercise.


I was still without a circle of friends to share all my news and worries. I had a hard time connecting with other women. I hoped that our baby would become the connecting link as it seemed that women with children had an easier time to make friends.


In January, I had my ultrasound and the first visit to a gynaecologist. We found out that we were expecting a little boy. Having a baby finally felt real. Despite all the excitement about my new role, I vowed not to give up everything as I had seen it with other mothers. My hobbies were still important to me. I realize now that although I did not paint or draw during the time, making my teddy bears, as well as all the projects I created for our baby boy, helped me to get through the lonely days. 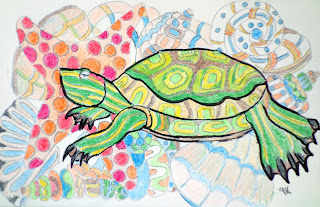 Do you turn to arts and crafts when you want to relax? How do you feel when you create something? If you would like some help to be more creative, please check out my summer schedule at https://www.kerstinpeters.ca/eventscourses/. On Saturdays at 1 pm, you have a chance to experience working with me for free during my 40-minute Art and Craft projects. I invite you to join me to explore and play.