The year 2005, the tenth anniversary of my move to Canada, started without any excitements. It was the quiet before the storm.


I was still a member of Arteast and build a close relationship with my friend and mentor Margaret Clyde, who became a motherly figure for me. She gave me lots of advice and was there for me not only for art-related questions.


I still felt very isolated. I realized that the adventure of moving to another continent and the special status that would give me among my friends had resulted in me seeing the future through rose-coloured glasses. My children, on the other hand, were true Canadians who knew no other home but Canada. They were not able to understand my homesickness.


Nevertheless, I was grateful for the good life with my wonderful family in our beautiful new house in the country. I still managed to cut out some time for my hobbies, which was more than many young mothers who worked could say. I continued to miss my family and friends. I also got increasingly worried about my ageing parents. This worry was increased by the fact that my father had to be hospitalized with heart attack symptoms in early September during his visit to Canada. It was scary, even though the doctors concluded again that it was a false alarm. 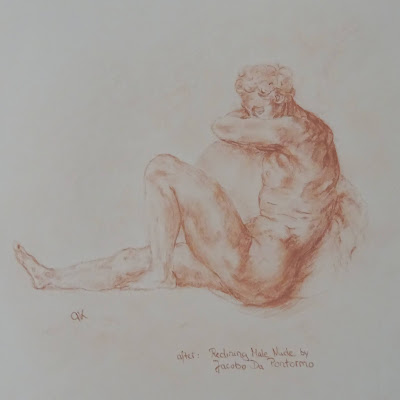 Going to the live drawing classes became an exception. However, I continued my drawing practices with a workshop at the National Gallery where we learned the secrets of the old masters. Instead of painting in my spare time, I spent lots of time in the yard planting. It was already July when I started the work on my mother’s portrait that showed her at the age of six (see above). I finished it on time for the Arteast juried exhibition “Rearview Mirror”.


I made spending time with Dominic and Christine my priority. We always had a full programme of activities, from painting pottery together, attending art workshops, going to the museums, meeting friends, to going to the movies.


In the fall, we had lots of visitors: my friend Bettina arrived first, followed by both my godmothers and their husbands who came for a quick visit during a Canada trip.


When my parents left at the beginning of October, nobody had any idea that they would never see our dog, Jessie, again. She had been a little quieter than usual despite all the visitors. When this greedy girl did not finish her breakfast on October 10th, I was very scared.


After a couple of days, we found not only out that something was indeed very wrong with her but also with my dad’s heart. This pain was increased by the death of Ingo’s grandmother. I was devasted. I had a hard time to keep my composure.


We tried some medication to help Jessie, but a visit to the animal clinic brought the confirmation that she had cancer of the spleen and only a short time to live. She made it to her 10th birthday on October 29th, when she stopped eating. The next morning she started vomiting and we drove her for the final time to the vet.


I spent the first week crying whenever Dominic and Christine were at school. Almost my whole life in Canada had been linked with Jessie. She was comforting me during my time of homesickness, Ingo’s time in Nova Scotia, two bad pregnancies, and Dominic’s hospitalisation a week after his birth when doctors told us that he would probably not make it through the night.


I spent the rest of the time until Christmas in a daze. I functioned like a robot. The only thing that kept me going was our upcoming flight to Germany. However, the news from Germany got increasingly worrisome: my dad had been hospitalized several times with chest tightness and infections. He would receive a triple bypass in early January. My mother was beside herself with worry. After all, she had lost her father through a heart attack when he had just been 50 years old.


It was a very quiet Christmas Eve. On Christmas Day, we drove to Ingo’s parents where we spent three days before we flew to Germany. We spent the turn of the year with my parents and sister. While we watched the fireworks, we hoped that 2006 would bring all of us more happiness and good health.


This is the last part of my twenty-five-year journey for this year. For the next three weeks, I will post a review of twenty-four of my 2020 artworks. If you follow my Facebook page https://www.facebook.com/KerstinPetersPaintings, you can see these artworks in my daily advent calendar post. The journey continues with the event of 2006 which marked an important turn in artist career. This blog will be posted on January 8, 2021.