We began the year 2012 in the quiet setting of the cottage. There we enjoyed a beautiful view of the frozen Ottawa River and the snow-covered landscape. At the time, my children were still young enough to spend the week with us. Due to the short winter days, we still had lots of time after our hikes to watch movies and play games together.

I still squeezed in some time for creativity. In the winter months, I usually prefer to practice drawing as it is easier to bring a couple of pencils and a sketchbook instead of all the materials for painting. Plus, even though acrylic paints don’t smell, the mediums I use do. 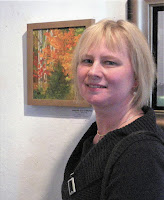 Back at home, I brought a new painting to the Ottawa Little Theatre, where I regularly exhibited with the Ottawa Art Association. The next stop was the vernissage of the Plein Air Panach 7 exhibition at the Gallery Old Chelsea. I was proud to be part again of the Plein Air Ensemble exhibition.

Even though my children still had a busy schedule of sports and music activities, my days were less hectic. Closing our Galerie de la Rive, handing over the Ottawa Art Association website, and concentrating only on my private courses created some more creative time.

In the second half of January, the painting course at the church started again. Later in the spring, I also taught a private student.

Aside from teaching, I got into the habit of painting every second day. I felt good about my regular time in my studio. In general, I only paint for 90 to 120 minutes before I need a break. Only when I am close to the end of a project, I completely lose track of time and might spend half a day painting without a break.

I also continued teaching German. I enjoyed sharing my language and traditions. For the longest time, I was nervous about losing my German. I had heard stories of immigrants who were not comfortable talking and especially writing in their mother tongue anymore. I learn something new all the time when I am teaching. When you grow up speaking a language, you never question grammatical rules as you use most of them intuitively. Once you have to explain grammatical structures to people who do not necessarily know anything about grammar, you gain a deeper understanding of their struggle.

At the end of February, I went painting the fishing huts at Petrie Island with some of my friends. It was my first visit to this little winter town of colourful structures. They appear every winter on the Ottawa River and is quite a typical activity during the Canadian winters. It is not a very common winter activity in Germany. It is only allowed at few lakes, and anglers do not build sheds. We talked to some of the fishermen. One even invited us into his cosy hut, furnished with a small stove, a table and chairs.

We were lucky to spend March Break also at the cottage. This time, my parents had arrived from Germany to spent the week with us. We had a great week time. However, all the relaxation vanished when we arrived at home and heard heart-melting cries from our cat. I ran into the basement but could not find him anywhere. I was frantic. He sometimes liked to disappear in the ceiling, and I feared he was stuck. Suddenly, someone called from outside. They had found Miko sitting under the kitchen stairs with red ears and paws.

As it turned out, he had escaped when a neighbour had visited him. Luckily, the sun had been warm, and the shelter under the stairs had prevented the worst. He still had some frostbite and was a little skinnier than we had left him, but all in all, he was OK. However, he was scared and suddenly cried every night for a long time. 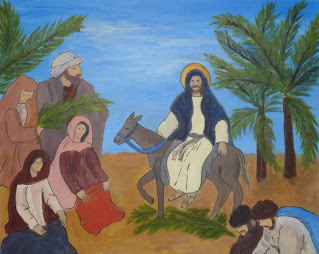 The pastor of our congregation asked me to paint a Palm Sunday scene for the church. I was not too crazy about the request as Jesus riding on a donkey seemed challenging. I felt nervous about creating a religious painting, but I also felt too shy to refuse the work. The struggle is visible in the artwork. It is not my style and, despite frustrating efforts, not a good painting - a perfect example, what happens if you create something and your heart is not in it.

At the end of March, I went with my friends Janis and Hélène to the next Plein Air Ensemble trip to St. Adèle in Quebec. Most of the days, the sky was grey. On our last day, however, the sky was cloudless and blue, but the wind was so icy that Janis and I spent most of the morning in the car. We only got out to take pictures until we found a big rock in a sheltered area. When the wind had calmed down in the afternoon, we created a second painting at the Rivière du Nord. This time of the big waterfall.

In May, I exhibited paintings at the Tulip Festival for the first time. I had already painted with Janis and Hélène at the festival for a couple of years. The beautiful flower beds have always inspired us. We also have some stories to tell about interactions with other visitors, but that is a subject for another time.

In mid-June, I joined other members of Arteast, a local art organization, for a trip to Montreal. After a visit to the Montreal Fine Art Museum, we strolled through the streets of Old Montreal. Some of us created little sketches, but most of us visited the many galleries to see what they considered worth showing.

Spending time at the museums and with other artists is very important for me. The life of an artist can be lonely and very frustrating at times. I cherish the interactions and exchanges with my fellow painters and the inspirations of the masters.

If you want to read what the second half of the year had in store for me, please join me again next week. I encourage you to subscribe to automatic delivery of my blog to your email inbox.