I started 2013 with a visit to the Frida and Diego exhibition a the Art Gallery of Ontario. I could relate to Frida Kahlo’s way of expressing her pain and feelings in her art. I could feel the rawness and strength of her emotions. Diego’s paintings, on the other hand, did not touch me at all.


My passionate response to Frida's art was possibly related to my worries about our daughter. She developed persisting headaches and dizziness followed by stomach problems that resulted in several trips to the children’s hospital. The doctors did not know what was wrong, as her test results did not show any abnormalities. We were extremely anxious.


We also worried that she would fall behind in school. On most days, Christine was in too much pain to go to school. Luckily, she had a great teacher who prepared material for her that she worked through whenever she felt well enough to concentrate.


While I worried about my daughter and our upcoming trip to Germany, I experienced an exciting success in my business: a former client bought four larger paintings at once.

I needed the good news. I was disappointed about a recent commission. I had spent a lot of time creating a portrait for another client. I should have realized from the start that the project was doomed. The client had commissioned a painting of his late father using a reference photo of another artist’s black and white drawing. The drawing showed only the face and a hand with a pipe.


Creating a portrait is tricky. The image we have of a person might not at all be a reflection of the way someone sees himself or a loved one. In this particular case, I had not even seen the person or a photograph. I should have realized that this drawing was already an interpretation of the father’s image. Therefore, my painting was an interpretation of that drawing. The whole process was like whispering a message from one person to the next. Usually, the information deviates more and more from the original.

My client did not recognize his father in the portrait. I was disappointed but at least sold another painting to him. The failed artwork was a good exercise, but it is probably not a painting that I will ever sell.


Fortunately, I found lots of enjoyment in working with my private students. My adult painting student was very talented and hardly wanted to stop at the end of each class. My two German students and I shared lots of laughter.


At the beginning of March, my children and I finally sat on a plane to Germany, where we visited my relatives and friends. We also went on a short trip to Paris with my mother and sister, which left us with many unforgettable moments.


While I was in Germany, I received news that I had passed the first level for being accepted as a member of another gallery. I had to deliver samples of my work for further jurying. In the end, the jury rejected my application with devastating remarks. For weeks, I was so depressed that I wanted to stop painting forever. There were only two facts that saved me: another friend received similar remarks, and my urge to paint reappeared after the first shock had passed.


Back at home, Christine’s medical appointments continued. Despite all the pain and missed school and dance classes, she was still determined to finish her school year with high grades and participate in her dance competitions. She succeeded. 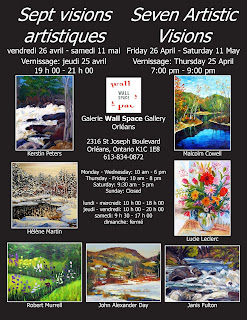 At the end of April, I was one of the seven members of our plein air group exhibiting “Seven Artistic Visions” at the Wall Space Gallery in Orleans. It was exciting to be part of the group with fellow artists Janis Fulton, Hélène Martin, Lucie Leclerc, Malcolm Cowell, Robert Murrell, and one of my former teachers, John Alexander Day.

Less than a months later, Janis and I went to paint at the Tulip Festival to warm up for our painting trip in the Whitewater region with Hélène. The three of us spent a couple of days at our cottage, where we went out every day to paint the spring landscape with our friend Bill.

These days were my last retreat before a couple of hectic weeks of soccer tournaments, dance recitals and exhibitions. I had a solo show at Lunasole Restaurant in Orleans. Two of my paintings were on display at the Shenkman Arts Centre in Orleans during the Arteast exhibition “Cumberland Museum – En Plein Air”. Then, I participated in the Navan Art Exhibition and Sale, where I sold three paintings.

To re-energize, I spent a day with members of Arteast Ottawa in Montreal, where we visited the breathtaking Chihuly exhibition. I could not get enough from the bright colours and shapes of the fantastic installations. What exceptional art!

Soon, a new opportunity arose: The Plein Air Ensemble organizers wanted to pass on the torch. My friend Hélène asked me whether I was interested in working with her. The prospect of scouting out new venues and organizing the trips for the group was as tempting as the prospect of cheaper trips. At the end of June, we made our first discovery trip to the Maniwaki area. It was fun to spend time together and also a good practice of my French skills.


Next week, I will let you look at the exciting second half of 2013. If you like my stories, please share my blog with family and friends.