The second half of 2012 started with one week at the cottage. During our summer week, I usually find it too hot to go for daytime hikes. Instead, I spent a lot of time painting and felting when we were not at the beach. I sit in the mosquito-netting enclosed part of the patio, finishing paintings and sometimes working on new artworks. I love the feeling of being outside, sheltered from insects and too much sun.

For many years, I did not work in July and August to spend time with our children during the beautiful Canadian summers.

As I knew I would not find long periods for painting, I created 6” x 6” images of flowers. At the end of the summer, when my daughter and her friend were at a day camp, I managed to spend more time in the studio. I created At the Market II for the West-Carleton art show theme entry. For this purpose, I had visited the Cumberland Farmers Market to take pictures as a reference. I create a bright painting of a stand with lots of vegetables (see above). 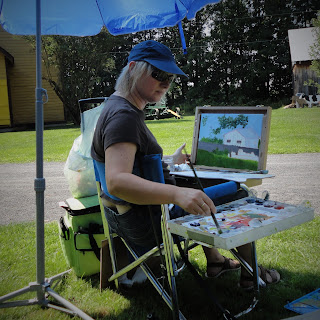 I also took the opportunity to meet with other Arteast artists at the Cumberland Heritage Village Museum for a day of plein air painting.

On August 25, I took part in the Art in the Park event at the Cumberland Farmers’ Market. Setting up the grids at 7 am was torture for me, but I had a successful day talking to potential art students. I sold a tulip painting and greeting cards. Looking for new venues was high on my list of goals when the Gallery Old Chelsea relocated. Following the move, they only exhibited works of the associate members. I was busy preparing for some upcoming exhibition in the Glebe Community Centre and the Ottawa School of Art Showcase. I also applied unsuccessfully to become a member of another gallery.

On the second weekend of September, my friend Janis and I drove up to Kamouraska for our yearly painting trip. We had a terrific week, although the strong winds were challenging at times. However, the temperatures were as high as never before. We spent two days painting in summer clothes with temperatures reaching 27 degree Celsius.


While I was settling in after the painting trip and already preparing again for the next art show, I received devastating news from Germany. My beloved godmother had a brain tumor. The news hit me especially hard as nobody had told me that she had health problems for months. It was not the first time my family had decided to keep me in the dark about a critical situation. They often hoped to deal with the problem without me worrying from afar. Needless to say, that it led to me worrying even more when I learned the facts.

On September 22 and 23, I participated in the Glebe Fine Art Show. I was frustrated with a lack of sales, even though I was excited when one of my former customers told me that she still enjoys her painting every day. The bunny would still look as lively as the day she first saw the portrait.


I was also disappointed about the cancellation of my German class with the local recreation centre. Completely unexpected, I received the notice of dismissal from the City of Ottawa. I was shocked as I had discussed switching from German instruction to art instruction with my supervisor. Luckily, I received a new contract for the winter session.

There was also another positive outcome. One of the registered participants of the cancelled course became one of my private students. He was not only a long-time student but became a good friend over the years.

Two weeks later, I took part in the West Carleton Arts Society's Expressions of Art Exhibition in Carp. It was my first exhibition west of the City of Ottawa. I met many interesting people but was disappointed that I did not sell a single painting. However, this disappointment changed into delight when one of the visitors contacted me after the show and bought four.

On October 20, I was a facilitator at the You Deserve It Women's Day Conference in Orléans. I held two workshops with the theme Explore Your Creativity Through Painting. It was a new and exciting experience for me. Every participant had so much fun, no matter whether they used a paintbrush for the first time or had painted before.

On the weekend of November 24 and 25, I participated in my first Christmas show at the Watson's Mill Annual Christmas Market and Fine Art Sale, 5525 Dickinson Street, Manotick. I enjoyed the companionship among the artists but disappointingly did not sell anything.

I finished my creative activities at the beginning of December with a two-day impressionist workshop by Andrea Mossop. Claude Monet is one of my favourite artists. However, I realized during the workshop that even though I admired his artworks, I would never want to apply his technique again.

I have always enjoyed painting in the techniques of the masters because you learn something new every time. After each workshop, I have admired their mastery even more. Each time, I incorporated some of the gained knowledge in my work. I feel the influence of some artists more than others, not only from the masters but from my fellow painting buddies.

If you want to see what new challenges and opportunities I faced in 2013, come back to this blog next week. To see more of my 2012 paintings, please visit my website www.KerstinPeters.ca.